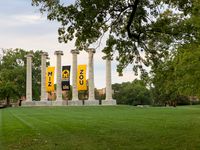 COLUMBIA - The University of Missouri released the results Tuesday of a survey on the campus climate surrounding sexual assault and harassment.

The springtime survey was the second time students at the university gave their opinions on the topic. Researchers sent out the first survey in 2015.

Just more than 20% of MU's student body completed the survey earlier this year.

Of the undergraduate women who completed the survey, 26.6% said they had been sexually assaulted since coming to MU. This was slightly lower than 27.2% of female respondents in 2015 who said the same, but the researchers said this was not a statistically significant decline.

Additionally, 13.1% of undergraduate women who completed the survey said they think it is very or extremely likely that they will experience sexual assault or other misconduct in the future while enrolled at the University of Missouri.

MU junior Christian Heutel said this is a striking statistic.

"It's definitely something I'm concerned about," she said.

However, Heutel said she feels more comfortable because she knows about on-campus resources to which survivors of sexual assault and harassment can turn.

"I do know that if [sexual assault] ever happens to me or one of my friends, there's always a resource we can go to, and it will be something that is confidential if we want it to be."

"Just reporting doesn't mean you have to go through the process," Hayes said. "There are lots of options available to you that don't involve a more formal process because I think that can be intimidating for students, and that's not the desired outcome and process that a lot of students want to go through."

The survey also indicated more than 93% of students who took the survey said they had completed training or gone to an info session on preventing sexual assault or other misconduct.

Heutel said she remembered going to a training at the start of her freshman year, but she said she has since forgotten a lot of the information.

"I think it would definitely be beneficial to have an additional training of some sort just because I haven't had anything since my freshman year," she said.

Hayes said her office is working on more education initiatives.

"[We're] talking to groups about how they can be safe and protect themselves and talking about consent," she said. "That education piece is really key."

One student who did not want to be named because of her history with sexual assault said the survey results were frustrating for her.

"I understand that the university is doing their best to determine the need for resources and the progress they have made and need to implement, but this survey just does not do our students or our university justice in understanding the deep and widespread sexual violence experienced by students," the student said.

MU was one of 34 member universities of the Association of American Universities (AAU) that conducted the survey.

7 officers injured, no arrests made after Saturday night protests in Ferguson Posted on 31 May 2020 at 12:09pm

Callaway county chase ends with man hospitalized Posted on 31 May 2020 at 2:22pm

Massive protests raise fears of new virus outbreaks Posted on 31 May 2020 at 10:59am

Hatch opens as astronauts arrive at International Space Station aboard SpaceX Crew Dragon Posted on 31 May 2020 at 1:16pm