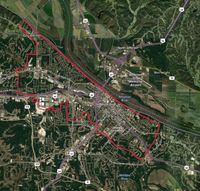 JEFFERSON CITY - A precautionary boil water advisory has been issued for Missouri American Water customers in Jefferson City after a contractor broke a 12-inch water main on Missouri Boulevard between Bolivar and Highway 50.

The break caused a pressure drop in the water system and is strictly a precautionary measure with no evidence of contamination, according to a press release.

The advisory affects approximately 8,000 customers in Jefferson City. Customers can visit a website to enter an address and confirm whether it is within the affected area.

Customers in the advisory area should bring their water to a rolling boil for three minutes before using it to drink or cook. Tap water is safe for bathing and washing clothes.

The precautionary advisory will be in effect until water quality samples confirm that the water is safe for consumption.

CPS superintendent explains what bond issue would do for schools Posted on 1 June 2020 at 6:22pm