Police search for person who fled after car crash 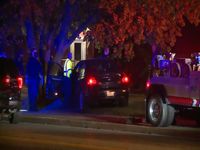 COLUMBIA — Police chased a person through Columbia Wednesday night after they said the suspect failed to pull over for a police car and then crashed into a tree in front of Grant Elementary School.

Public information officer Jeff Pitts said officers tried to stop a vehicle in the area of I-70 Drive and West Boulevard because the vehicle's license plate was obstructed. The vehicle didn't stop, so officers initiated a pursuit. After the vehicle crashed into the tree, Pitts said the driver fled the scene on foot. They have not been located at this time.

Pitts said a passenger who was in the car at the time of the crash was injured and transported to a local hospital for treatment.

Officers from the Columbia Police Department, MUPD, and troopers from the Missouri State Highway Patrol all assisted in the search for the man. An MSHP helicopter was searching an area around the Daniel Boone Regional Library.

Columbia Police Department PIO, Jeff Pitts, confirmed there was a police pursuit this evening. Police had a perimeter set up near the Lucky’s in downtown Columbia. @KOMUnews

CPD investigating home invasion with shots fired Posted on 11 August 2020 at 7:21am