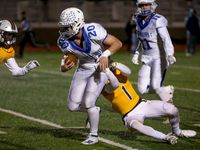 Things were uncharacteristic in every sense of the word last week for the Battle Spartans.

In a 29-0 defeat to Rockhurst — only the second shutout in program history — Battle (4-3) had what seemed to be a freaky Friday moment. An usually explosive offense seemed shut down by the Hawklets’ defense and, despite giving up four touchdowns, the Battle defense seemed to have its best performance yet.

Between the role reversal on both sides of the ball and the amount of injuries allotted, the Spartans will face a lot of questions when they head to Missouri’s capital city this weekend to take on the Jefferson City Jays.

What’s the status of Gerry Marteen, Landon Ray and others?

The injury bug may have been the biggest issue for the Spartans in last week’s loss to Rockhurst.

Marteen didn’t dress out for the second week in a row and, as the game went on, Battle continued to lose players.

Offensive coordinator Matt Herman said earlier this week that the team will likely be without both of its tackles — Ray and Sam Ennis — this week, but both should be back for the Spartans’ matchup with Hannibal the following week.

How cautious will the Spartans be with Harrison Keller and Khaleel Dampier?

Arguably the biggest players bit by last week’s injury bug were both of Battle’s quarterbacks, Keller and Dampier.

Late in the first quarter against Rockhurst, Dampier came off the field with a leg injury. About two minutes later, Keller was on the ground with what looked to be a shoulder injury. Dampier returned in Friday’s loss, but Keller — who had apparently been playing through injury the last couple of weeks — sat out the next three quarters.

Battle coach Atiyyah Ellison said Wednesday that both quarterbacks are expected to play, but didn’t give much of an update on their injuries.

Quite frankly, it’s unclear just how careful Battle will be with either of its quarterbacks. Assuming both are at full health, it’s likely the offense will see the same “hot hand” approach it has seen all season.

If either is not at full health, that’s where things get interesting. Herman has said the offense has “a few surprises” up its sleeve moving forward, and the thought of Battle crafting a new wrinkle to keep both quarterbacks as fresh as possible is intriguing.

Will Battle manage to generate offense without a quarterback? If so, how?At the end of last week, the Spartans saw someone not named Harrison or Khaleel take a direct snap for the first time all season.

Running back Darren Jordan took a direct snap in what looked to be a wildcat formation and cut to his left for a 13-yard gain. Jordan and junior DaleShaun Coleman both shared snaps out of the formation, and Jordan even threw a pass at one point.

Coleman said after the loss that the formation has been something the offense has been working on since Week 1.

“If both quarterbacks go down, that’s something we can throw in,” Coleman said.

Beyond the direct snap and one pass play that the offense ran out of that formation, Coleman said there’s not much more variety in the scheme. However, he said it’s likely to become more complex as the team grows more comfortable in the formation.

Can the defense follow up on maybe its best performance yet?

Ellison said he tries not to over-praise his team, but he definitely gave the Spartan defense its due and “sang them sweet” songs after it put up a fairly staunch performance against Rockhurst.

As a unit, Battle’s defense had six tackles for loss, four passes defended, three sacks and a forced fumble and blocked field goal. The defense also stopped the ball at or behind the Rockhurst line of scrimmage about half the time.

The quality of opponent may be a little different this week for the Spartans, as Jefferson City is currently riding a four-game losing streak. The Jays — who are averaging 21.1 point per game so far — are also winless at home this season.

Director says medical marijuana could be in dispensaries this fall Posted on 11 July 2020 at 11:17am