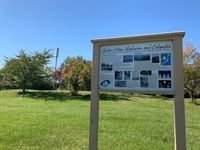 COLUMBIA - Sixteen Columbians will travel to Columbia's Japanese sister city, Hakusan City, to reaffirm the relationship between the two cities.

Sessions said the district is hoping to create a STEM exchange program with a school in Hakusan City.

"We're still working out the details, but a group of students every year, potentially, would be able to go over and have an educational experience that’s truly unique and science-focused in Japan," he said.

The group leaves on Saturday morning and will be in Japan until October 27. During that time, some of their activities will include meeting with city leaders, touring an elementary school and meeting with university officials.

The trip was supposed to include a visit to Nagano Prefecture, which is Columbia's sister state in Japan. However, the recent typhoon severely damaged the region.

"It's actually very unfortunate," Sessions said. "There has been great loss of life and a significant amount of damage, and we are very aware of that. We have unfortunately had to cancel the Nagano section of our trip because we would just be in the way if we were to visit now."

Sessions said the change in itinerary means CPS leaders will have more time to discuss the details of the school exchange face-to-face with their Japanese counterparts.

McCollum was part of the first Columbia delegation to visit Matto.

"It was just a very small delegation and we did a short trip to Matto City and were warmly welcomed by both the mayor and all of the people," McCollum told KOMU in May.

In 2005, Matto City merged with other nearby cities to create Hakusan City.

Sessions said the relationship between Columbia and Hakusan City weakened in the early 2000s, but it has recently seen a revival.

A similar delegation from Japan visited Columbia in May.

Sessions said he hopes this trip will raise awareness in Columbia about the tie between the two cities.

Columbia has four other sister cities in addition to Hakusan City.

Louisville fires its police chief over handling of fatal shooting during weekend protest Posted on 2 June 2020 at 7:08am