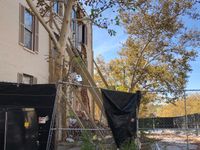 JEFFERSON CITY - A damaged downtown Jefferson City building is scheduled for demolition, but the owners have filed an appeal in efforts to save their building.

The buildings at 200 and 202 E. High St. share a common wall. It was ruled that 200 owner, Neidert Properties LLC, owns the shared wall and could proceed with demolition.

Notices were sent to both owners informing them they have until Dec. 9 to begin repairing their building. If no repairs have been started by then, the demolition will take place on Dec. 10.

The appeal will not affect the Dec. 9 deadline.

Building 200 can be demolished without demolishing 202, but a new exterior wall would be needed. Jefferson City counselor, Ryan Moehlam, said that's what the city has been trying to encourage to happen.

"The best outcome is for the property owners to take care of this situation among themselves and to hopefully save the building at 202," Moehlam said. "But that solution is probably the most expensive solution."

Many pedestrians and drivers in the area have complained about the obstruction and the fact that something has yet to be done about it. The concrete barriers and fencing set up to keep the public safe block part of the sidewalk and road.

"For people who do drive, its really, really a problem because of all the blockage and everything in the road. For pedestrians its a big, big problem as well. It's very frustrating," Jefferson City resident Wayne Lee said. "But the question for many of us is when is it going to clear up?"

Louisville fires its police chief over handling of fatal shooting during weekend protest Posted on 2 June 2020 at 7:08am