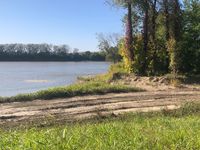 ASHLAND - The Wilton Landowners Levee and Drainage Association has waited a year to be reimbursed for work completed after the flood in 2019.

The association usually receives money back from the county quickly after doing repairs, but this time the county is going through FEMA before reimbursing them.

The flood in 2019 left the intersection of Harold Cunningham Rd. and Rippeto Rd. with a 100 ft. by 100 ft. wide and 35 ft. deep hole. The bridge near the intersection was described as unrecognizable by landowners.

Landowner Jamie Morris said there was only 15 feet of the bridge left that you could see and attempt to cross. He said that he and his family were trapped for just about 7 weeks.

Morris said the hole blocked the driveway to his family home, so they used an ATV to go through the woods to leave the house.

"I took for granted being able to leave home and get little things like dog food," Morris said. "I had trouble getting my kids to their baseball games and getting my wife and I to work."

Morris said if it had not been for the Wilton Landowners Levee and Drainage Association for doing repairs, he still wouldn't be able to go to and from his house using his driveway.

"It was a major inconvenience," Morris said. "Not only for me and other landowners, but also for everyone who travels through here to go to the river."

President of Wilton Landowners Levee and Drainage Association, Stephen Diederich said he and other members worked every day for two weeks to fill the hole and repair the road that would allow for Morris and his family to access their driveway.

Diederich, along with other members, not only fixed that hole in that intersection, but also made an entirely new road that is close to the river. He said they had to move the road and not use the same one, because there was too much damage.

The project costs the association between $70,000 and $75,000. They have not been reimbursed by the county yet, even though the Diederich says the county approved of the work they did.

"My family did a lot of the work and we've been sitting on our bill, rather than give it to the Levee Association. So, it's become very personal for me that they won't pay us; and we did the work for a pittance compared to what anyone else could have done it for."

Diederich said he reached out to two contractors to compare prices and found that the association had done it for almost half of what other people would have charged.

He said he is working with the Southern Boone County Commissioner Fred Parry to help resolve the issue of the association not being reimbursed for the money they spent. We reached out to the commissioner, and he was not available to speak.

Diederich and other members have been waiting for over a year to be reimbursed. He said they have never run into this much trouble with getting money back from the county with previous repairs.