11-year-old with disabilities testifies in front of House committee 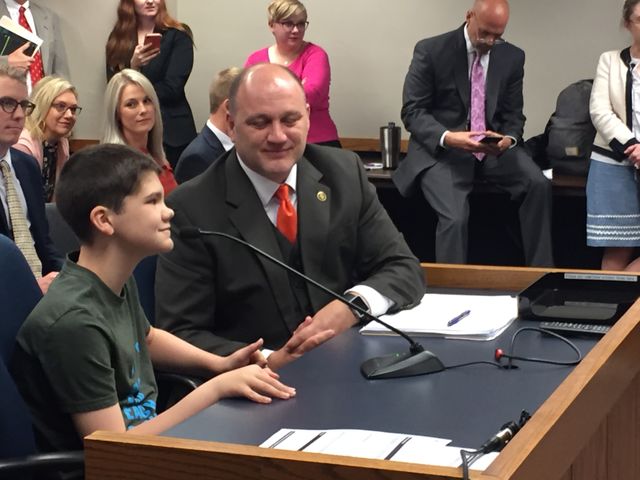 JEFFERSON CITY - Nathan Schelp is an 11-year-old with an unknown genetic disorder. On Tuesday, he testified in front of a House committee in support of a bill that would help him and thousands of kids like him.

Like many pushes for legislation change, there are two similar versions of the bill.

This is the third time this legislation has been tried at the Capitol, but this time there is hope it could make it to the Governor's desk.

Robyn, Nathan and the rest of their family have been coming to the Capitol for three years now, talking to anyone they can and trying to gain support for the bill.

“I’m doing this for the kids who are just finding out they have a disorder or a diagnosis and they need these therapies, because that early intervention is huge. It is life changing to these children," Schelp said.

Schelp said when Nathan was younger, doctors weren't sure if he was ever going to talk. She said the past two years they've really upped Nathan's speech therapy and confidence.

“Now he has words and we're able to see what's really inside of his brain and his heart," she said.

"We would go from office to office and he would connect with people, he would love on the dogs, he would give high fives," Schelp said.

During his testimony today, Nathan told lawmakers about his disability, the therapies he does, how he loves to play with his best friend and what he wants to be when he grows up.

Schelp said Nathan has made a lot of friendships in the past three years at the Capitol, and one stands out.

Basye met Nathan almost three years ago. Since then, he has seen Nathan's growth first hand.

“When I first met him he could only say a small phrase," he said. “But, now he can speak in short sentences and that shows you how the therapy is helping him.”

Just like Robyn, Basye sees all the benefits that come with early therapy.

“It is indisputable, the earlier a child gets into a consistent therapy program the better off they are in the future," he said.

Basye said he and Nathan have connected through their dogs, ironically, both dogs named Lucy.

“It took a lot of courage for him to get up and tell that story the way he did it and I think that went a long way," Basye said. "I don't think anyones going to oppose the legislation."

Last session, the bill ran into an issues with its wording.

The issue was described as a problem that could give insurers power to determine coverage. With the 2019 version, the power is set to be held by physicians.

Basye is hoping to see it get to the Governor's desk this session, after not seeing any opposition in the hearing on Tuesday.

During the past three years, Robyn said she is so happy with all the support and help.

"It’s empowering our children to reach their potential and be what God made them to be," she said.