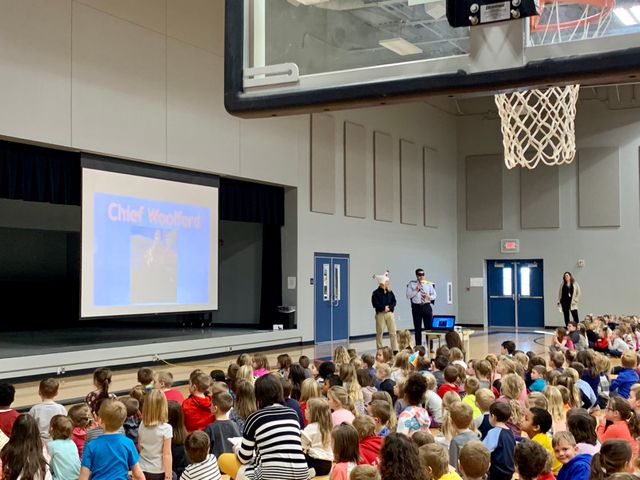 ASHLAND- Police Chief Lyn Woolford was presented with the award for “America’s Favorite Crossing Guard” at a school assembly at Southern Boone Primary School on Thursday.

Safe Kids Worldwide is a non-profit that ran the competition where the top three crossing guards win money for the affiliated school.

At the assembly, Chief Woolford said he had "no idea" he was going to win; he sent an email last week asking if he was going to hear soon about the final tally, and said the other officers did a good job at "pretending they didn't know anything."

“It’s very humbling," he said. "What it took to be the number one choice was quite an effort and it wasn't by me, it was the members of this community."

Woolford beat out 170 other competitors. Anyone with an email could vote, and could vote multiple times so long as they waited 24 hours.

He said he started serving as a crossing guard to show students that he and police officers in general are "not the bad guy."

Woolford was known for wearing funny hats during his shifts. He said he had the idea to "get the kids' attention" by wearing different hats for the holidays, but then morphed into something else when kids started giving him other hats to wear.

During the week of Christmas last year, Woolford was given seven more hats by parents and students.

"It’s just turned into a great little program, and it’s not even a program, it’s just an effort to do the right thing," he said.

His efforts seem to have paid off. After the assembly was over, kids were lining up to congratulate him and give him hugs.

"I don't look for accolades, I just look to do a good job."