Available resources and ways to help after mid-Missouri tornadoes

JEFFERSON CITY -  Resources are available across the area for those affected by tornadoes in Jefferson City and Eldon Wednesday night.

Gov. Mike Parson said people who need shelter should visit Thomas Jefferson Middle School, which is being served by the American Red Cross in Jefferson City.

The organization also has a shelter operating the Eldon Community Center on 309 E. 2nd St.

The church will also have a licensed psychologist on the premises Saturday noon to 4 p.m.

The Salvation Army is setting up mobile canteens to provide food and other resources.

Several restaurants, such as Popeyes and Ruby Tuesday, are offering free meals for first responders such as EMTs, police officers and firefighters. The Champs Chicken truck will also be in downtown Jefferson City Friday distributing free food.

Gerbes locations will be collecting donations until June 8. Grocery shoppers can either give a monetary donation of their choice or round up their purchase to the nearest dollar at the Camdenton, Columbia, and Jefferson City stores.

"Every penny will go to the American Red Cross to help those impacted by disasters to recover and rebuild," said Corporate Affairs Manager Sheila Lowrie.

The University of Missouri is offering free on-campus housing for displaced university and MU Health Care employees, students and their families. MU is also welcoming those connected to Lincoln University.

Rock the Community, a 5o13c organization from St. Louis, will also be distrbuting food and water from 12-4 p.m. Sunday.

Socket, a telephone and internet provider, issued a statement saying it is currently rerouting broken phone lines in order to reach people that have lost connection. Socket said it will be providing temporary voicemail boxes and will be suspending billing for people who were affected by the storm.

Verizon said it will be offering calling, texting and data to customers in central and southwest Missouri starting Friday. Customers will not need to opt-in to be included. The promotion will extend until May 30.

CenturyLink is providing free emergency call forwarding for 30 consecutive days to people in Jefferson City who were impacted by the tornado.

Republic Services will take other debris at their landfill located at 5645 Moreau River Access Road (Gate 1).

The Missouri Department of Public Safety has asked that anyone seeking to volunteer in the storm's aftermath register through the United Way of Central Missouri at http://unitedwaycemo.org .

The United Way said in a Facebook post Friday that utility companies are working clear power lines and make areas safe for volunteers to enter. As soon as all areas have been deemed safe, the organization will communicate with all registered volunteers via email to begin the volunteer recovery efforts.

The new Disaster Recovery Donation Site located at the Capital West Christian Event Center at 1315 Fairgrounds Road will be accepting donations for tornado recovery efforts. The site will be open 9 a.m. to 5 p.m. everyday. Distribution to tornado and flooding victims will start May 31.

Monetary donations are being accepted at the American Red Cross' Central and Northern Missouri Chapter’s website. or by calling 1-800-RED CROSS, or by texting the word REDCROSS to 90999 to make a $10 donation.

A comfort drive will be held on Saturday from 9-2 p.m at Southside Market, 100 East Dunklin, in Jefferson City. The American Red Cross asks that donations not be taken directly to the emergency shelters.

Items needed include the following items in travel sizes - however, the public is being asked to hold off donating items, as financial donations are more beneficial at this time. Checks can be made payable to American Red Cross.: 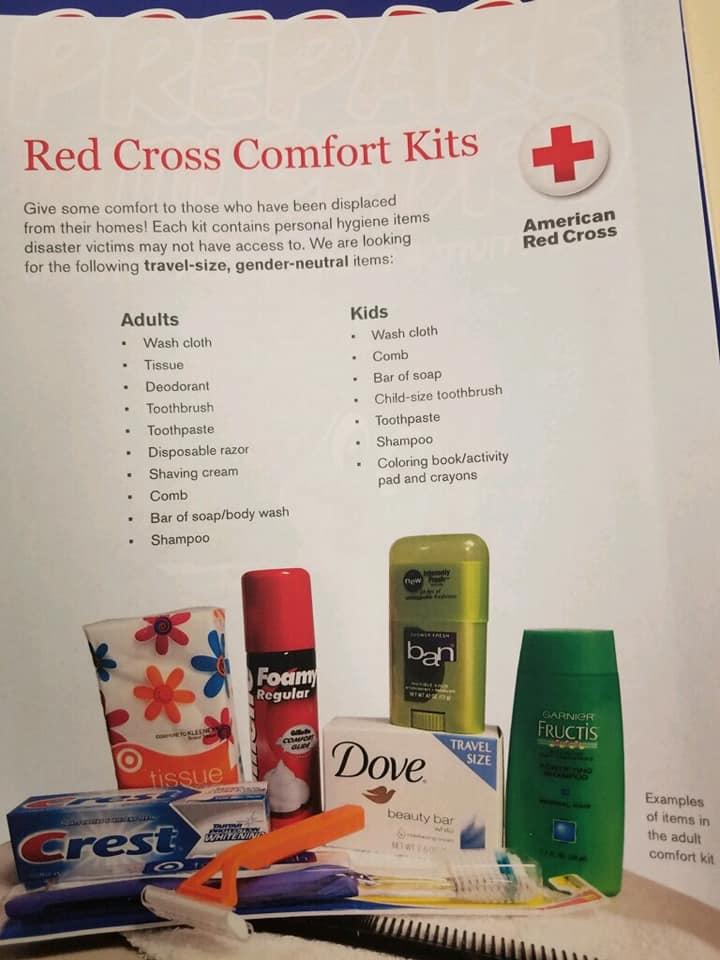 Our friends in #JCMO need our help! Join us on May 30 at The Blue Note to raise funds for disaster relief from the devastating tornado that ravaged the heart of the city ft. live music performers TBA. pic.twitter.com/QKD4ZQFyi3