"Back the Blue:" new license plate comes to Missouri 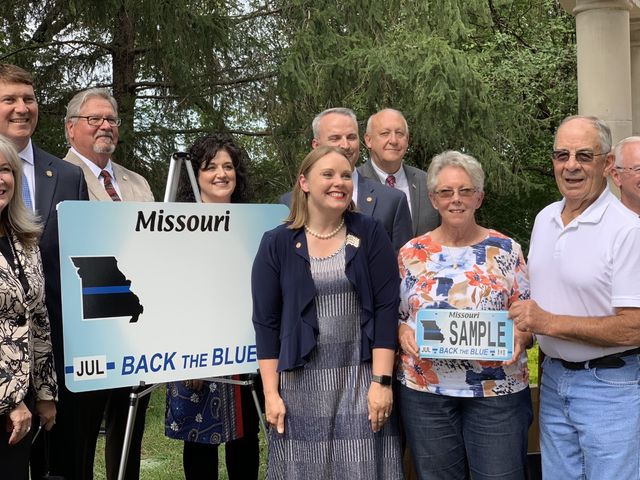 The "Back the Blue" plate was unveiled Tuesday at the Missouri Law Enforcement Memorial located on the riverside of the Missouri State Capitol. State Representative Sara Walsh, R-Ashland, said the purpose of the new plate is to allow Missouri residents to show their support for men and women in law enforcement.

"There's so many Missourians who have members of law enforcement in their families, and what people don't realize is those men and women are moms and dads, brothers and sisters, and we need a way to show support for them."

Many people testified before a committee about the need for the "Back the Blue" plate before it passed legislation on Aug. 28. Ashland Chief of Police, Lyn Woolford, was one of those people. He thinks there is already plenty of awareness for law enforcement, but the plate will bring it forward for others to see and encourage officers to do their job better.

"It's kind of like crime, the more efficient we get at reporting crime, people get the realization that 'Hmm, there's a lot more going on out there than we think,'" Woolford said.

Woolford said many times as an officer, you get sent on a call and are not well-received by residents. This feeling, he said, leads to a question in career choice -- but the license serves as a reminder there's public support.

"There's a lot of people out here who say we're doing okay," he said.

Columbia Police officer Molly Bowden died during a traffic stop in 2005. Her parents, David and Beverly Thomas, helped unveil the new plate design at the ceremony.

“It’s really awesome to have Missouri honor our law enforcement that way," Beverly said. "They never know what they’re going to face when they come up to a car, or in any situation, what's going to happen, so, we’re just very at peace to know they’re honored.”
"We've met so many awesome people that it makes it easier to smile," David said. "I didn't even want to smile when we first lost Molly. I didn't think there was anything to smile about. But police officers are awesome people."

Rep. Walsh said residents can order a plate online from the comfort of their own home. There is a $15 dollar fee on top of normal registration costs, and a $10 dollar contribution from each purchase goes to the Missouri Law Enforcement Memorial fund, which honors fallen officers.

(EDITOR'S NOTE: KOMU.com has updated this story to include the latest information.)

New projects ahead for Columbia city councilman after his final term

Fulton students aim to impact others with writing