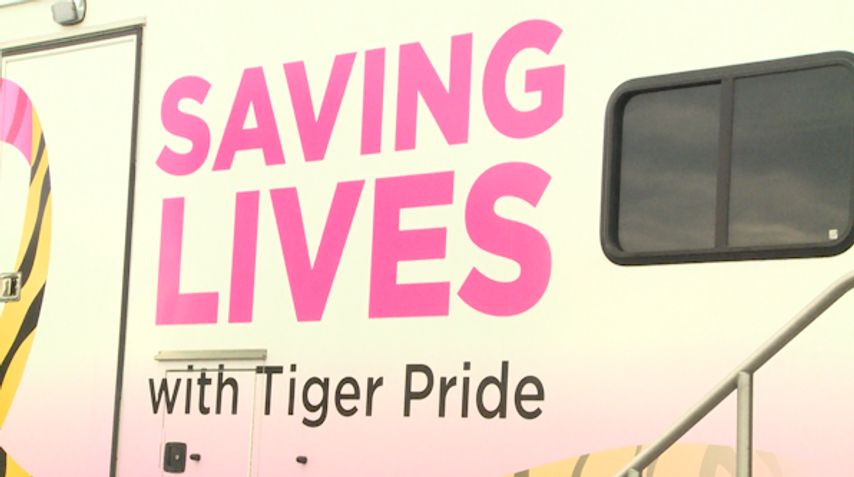 COLUMBIA - The Band of Brothers biker group held a fundraiser for the "Mammogram Van" Sunday.

The event was held at Elk's Lodge, where a current breast cancer patient Elizabeth Palmerstone works.

Some of the biker group members have a special connection to Palmerstone.

The Mammogram Van is part of MU's Ellis Fischel Cancer Center. It provides screenings across rural parts of Missouri. The goal is to bring quality screenings to women throughout Missouri. A nurse, a mammography technologist and another staff member perform the screenings.

Palmerstone, a bartender at the lodge, went in for her mammogram last year and found out she had tumors that were un-detectable by self examination. She went through surgeries and treatments of chemotherapy every three weeks.

"I was getting eight to ten bags of chemo every three weeks," Palmerstone said.

She is grateful for the mammogram van and other services provided for cancer.

"If I would not have had my mammogram this past year, I may not be here right now," she said.

Tracy Garland drives the Mammogram Van, she said while her job gets emotional, it is well worth it.

"We have a lot of people that come on the van after previous years, and they are in tears because we detected their cancer early. Like it says on the van, we are saving lives, it gets very emotional, it is a fantastic service," Garland said.

Palmerstone's cheery and positive personality remains a part of her despite the difficult treatment and circumstances.

"Like my nurses at Ellis said, if anyone was going to get the big bad and ugly give it to me, because I can take it, you have to, you have to smile, you just have to do it," Palmerstone said.

The event had food trucks, a bar run by Palmerstone and live music. About 100 people came out to support the cause.