Battle and Harrison Keller beat up on Harrisonville 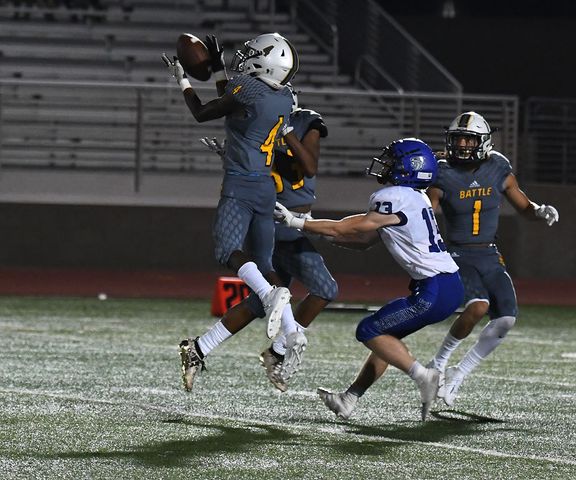 COLUMBIA - Battle head coach Atiyyah Ellison thought he was the only who'd notice it, but apparently it'd been the question of the quarterback room all week.

In fact, Battle's starting quarterback Harrison Keller said it's been a joke the last couple of seasons.

"I didn't even play (last year)," quarterback Keller said. "I was on the sideline, being ball boy and then this year, getting to play against them and put up numbers like we did against them was great."

More so good for the Spartans than ironic, Battle quarterback Harrison Keller did in fact beat up on the Harrisonville Wildcats (0-4) Friday night, totaling 419 yards — 167 through the air and 252 on the ground — and accounting for three touchdowns, en route to a 30-16 win for Battle (3-1).

Keller, who has set a new career high in passing attempts each of the last two weeks, said he's grown more comfortable in the pocket each week, mainly because he's grown to trust both his linemen and receivers.

"You're seeing him understand our concepts, the fine details of what we do," Herman said. "He's really understanding of where everyone's supposed to be and the best way to beat coverages."

Battle was missing players on both sides of the ball Friday. On offense, Battle again missed senior running back Darren Jordan, who didn't see the field despite dressing, and Gerry Marteen, who left the game early in the first quarter. Much like last week, DaleShaun Coleman was the next man up.

He again contributed to Battle's offensive production in a big way, totaling 176 yards on the ground, as well as two first-half rushing touchdowns.

"He can do it all for us," Herman said of Coleman. "His mindset's been fantastic these past few weeks and he's ready to do whatever he needs to for us."

The Spartans rotated a lot of linemen and, despite giving up 226 total yards — 208 of which were on the ground — the Battle defense made some important plays, including an interception from linebacker Clay Thomas Atherton and a three-play goal line stand that saw three consecutive stops from the Battle line.

Despite Coleman's success Friday, Battle broke even in the turnover margin Friday in part because of a Coleman goal line fumble.

That fumble, eight Battle penalties and three 40-plus yard Harrisonville kick returns were just some examples of setbacks that never allowed the Spartans to break open what should have been a blowout.

Ellison made clear after the victory — a win's a win, but he wants his Spartans to tighten up.

"There's just some structural things on offense, defense and special teams," Ellison said. "I feel like we did all that work and we're kind of unraveling a little bit, so we just need to tighten up."

Battle hits the road again next week to take on the Jackson Fighting Indians at 7 p.m. Friday in Cape Girardeau.