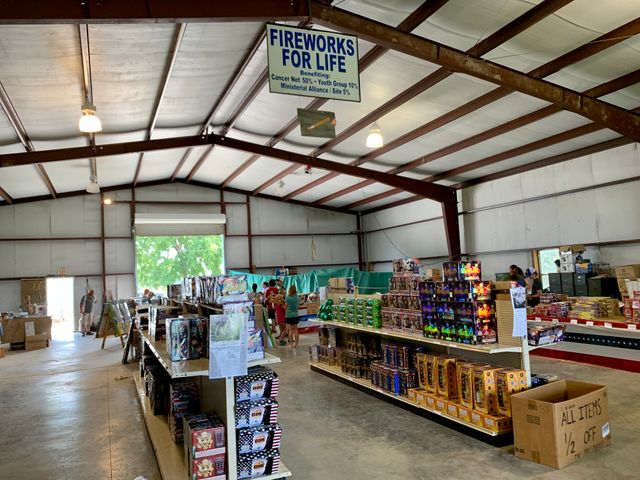 BOONVILLE - Hundreds of mid-Missourians stocked up on fireworks this week for the Fourth of July.

73-year-old Jim Edwards is one of many firework vendors across mid-Missouri — but he isn't in it for the money.

He started a nonprofit 14 years ago called "Fireworks for Life" after his oldest son, Tim, had a rare liver disease and gallbladder cancer.

Edward's youngest son gave 75 percent of his liver to save his older brother's life.

"If Tim hadn't had the operation, he said he'd be dead right now," Edwards said.

The $300,000 operation was mostly covered by insurance, but other expenses like food and hotel were not.

The community raised money to help with those expenses, and Edwards wanted to do something to pay it forward.

Of the money grossed each year, 10% goes to a local Catholic school youth group who helps work the stand, 5% goes to the local Ministerial Alliance and 50% of the net proceeds go to helping cancer survivors in Cooper County.

"A lot of families just can't afford to take care of those expenses in addition to what they have to carry for the cancer," Boonville Mayor Ned Beach said.

Edwards says he enjoys being able to give back to the community that supported him and his family when they had to go through similar experiences.

"I get to cut the checks and see the difference on people's faces that end up receiving this money," Edwards said.

Edwards buys the fireworks at wholesale prices from other vendors in mid-Missouri. With 50 percent of the net proceeds going to cancer survivors in Cooper County, the other half goes to paying the bills for the fireworks.

As of Friday morning, the firework stand has earned around $35,000 since it opened for business on Jun. 25. Edwards expects that number to go up significantly in the final hours leading up to the 4th of July.

"90% of your business is in the last two or three days, something like that," Edwards said.

Edwards refuses to accept donations other than by purchasing his fireworks.

"Come out and buy fireworks," he said. "It's what in front of your wallet. If you want to make a donation for something, make it to someplace else. We don't take donations."

Edwards encourages people who are looking to buy last-minute fireworks to buy from a vendor like him that gives back to the community rather than selling for profit.

Saturday will be the final day to purchase fireworks from the nonprofit. They are located at 19436 Hwy. 98, Boonville, Missouri and will be open at 8 a.m. and close at 9 p.m.