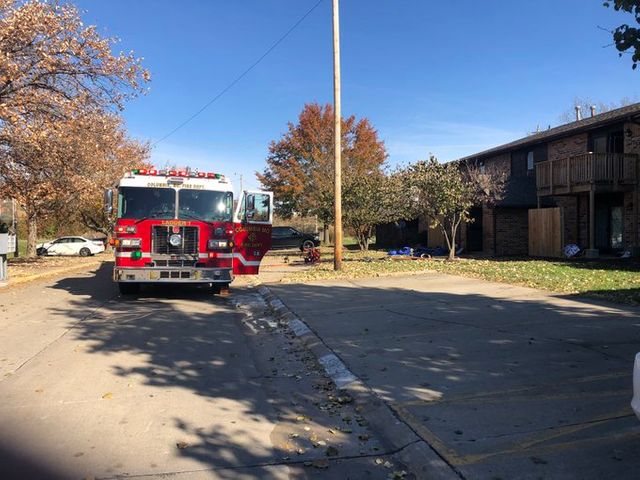 COLUMBIA - Fanny Winget and her son Isaac Shapiro were cleaning the house when they heard a fire alarm go off in their apartment building Saturday morning.

Winget said her son looked out their door to see smoke engulfing the hallways.

"I started praying because I don't want to go to hell," she said.

Winget and Shapiro live across the hall from the unit where the fire started. Firefighters said they got to Smithton Condominiums within four minutes of leaving the fire station.

Simona Vaughn lives in the building across the street from Winget.

"This is really interesting," Vaughn said. "Instead of just watching, maybe I could help."

Vaughn said she brought tea, apple cider, winter gear and blankets to keep her neighbors and their pets warm.

The bearded dragon is one of Winget's two pets she grabbed when she evacuated the building. She also has a cat.

In a press release, the Columbia Fire Department said fire crews contained a fire in a kitchen.

Neighbors said they believe it could have been a cooking fire.

Firefighters said they extinguished the fire in about five minutes after calling for additional resources.

While most of the building is safe for residents to return, Winget said their apartment is not in good shape.

Winget said the fire alarm in her apartment melted and it wreaks of smoke.

Firefighters said there is heavy damage to one unit and smoke damage to three others.

Fire crews evaluated two people for smoke inhalation and one of them was taken to the hospital.

Firefighters said they could not disclose the condition of the person.

Winget said she likes the area and hopes to find another apartment nearby if she decides to move out.

The Red Cross was also on the scene to assess any needs.