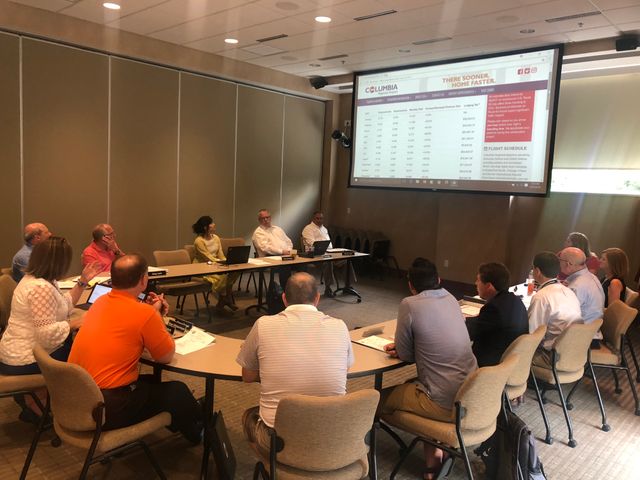 COLUMBIA - On Thursday, the Columbia Airport Advisory Board announced the TSA approved a security screening lane to open by the end of July.

TSA calculated numbers based on how busy the single lane currently gets and one of its ideas was to add a second screening line to keep people moving.

Columbia's airport manager, Mike Parks, said the new project will take out one or two lines of chairs currently in front of the already existing screening lane, but he said the benefits of moving people through faster will offset the loss of some chairs.

One of the board members mentioned his own experience at the airport saying it's "like a zoo" in the mornings trying to get to his flight.

Parks said the extra lane will be on the west side of the airport where the car rental counters are now. He said both Hertz and Enterprise are on board to move just a bit.

"We are very excited that TSA is providing this service as we continue to grow," Parks said. "This service will help expedite screening for our current and future customers."

One woman who travels in and out of COU frequently to visit her daughter said she's never dealt with long lines.

"I have only been here once when it was busier and I wouldn't really call it busy and I think the flow was satisfactory," Yvonne G. said.

Parks said both airlines are doing well as far as business in and out of Columbia.

"We had over 10,000 passengers fly out of COU in April," Parks said. "These numbers make it very apparent that the mid-Missouri community sees the benefits of the free parking, great connections, and a great customer service experience."

The board also discussed the recent increase in hotel tax revenue from 4 percent to 5 percent. For the 2017 fiscal year, the airport received about $490,000 from that 1 percent increase.