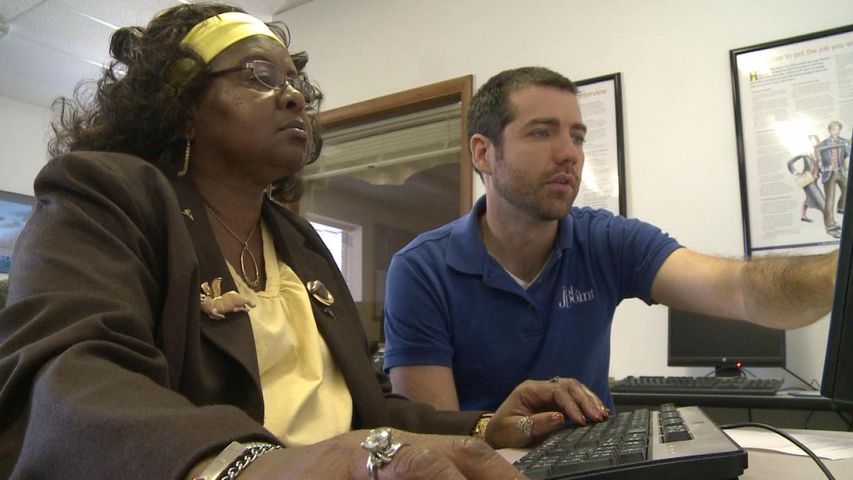 COLUMBIA - It seems like the obvious solution, find a job and get out of poverty, but that's not a foolproof plan. There's the challenge of actually finding a job and one that pays enough to survive.

In Columbia, there are several large, stable employers like the University of Missouri-Columbia, the hospitals, two big insurance companies; just to name a few. The city's unemployment rate was 5.5 percent in July, which was lower than both the state and the nation's rate. The state stood at 7.1 percent and the nation had a rate of 7.4 percent.

So, it seems like getting a job in Columbia would be easy, but for the 5.5 percent, the search for a salary is almost a job in itself. Cheryl Wade-Coleman is one of those people looking for employment in Columbia.

"I need work because I've got bills and when my kidney failed those bills didn't stop," she said.

Wade-Coleman's getting help to rejoin the workforce after her health had other plans.

"I lost my husband, I lost my brother both who had failed kidneys. And then I found out that my kidney had failed."

Her kidney failed in 2003 and three years later she got a kidney transplant, that surgery
forced her to leave her job with the state.

Now, growing medical bills on top of life's basic needs are forcing her to go back to work.

"Money that I'm getting from social security is just not enough. So I need that extra umph."

Her age has her struggling to keep up with the ever-changing technology and young competition. She said she's been actively looking for jobs in Columbia for three years with no luck.

"I just keep going, just keep pushing, that's all I can do."

She came to Job Point in Columbia to improve her chances of getting a job. She's looking for customer service and data entry positions, similar to jobs she's had in the past. While she doesn't have a college degree to display, she's got the personality.

"She's super easy to work with," said one of the employees at Job Point who works with Wade-Coleman. "It's easy to introduce her to an employer for trying to network her with an opportunity because she's incredibly charming."

Wade-Coleman's one of many seeking the services at Job Point. She took office and technology classes there. The organization helps the disadvantaged and disabled improve their skills and find work.

"There is nothing we know of that breaks the circle of poverty better than employment, if we can train people to be productive and contributing citizens then they'll go a long way toward breaking that cycle," said Job Point CEO Jim Loveless

Every year, Job Point serves between 750 and 1,000 job seekers and the majority are under the age of 35. Wade-Coleman wonders if her age is turning employers away.

"I'm from the older generation and I think different than they do...It kind of makes you want to give it up and just say forget about it, but I'm not that kind of person," she said.

Wade-Coleman said she won't stop trying, her bills won't let her. And neither will her faith.