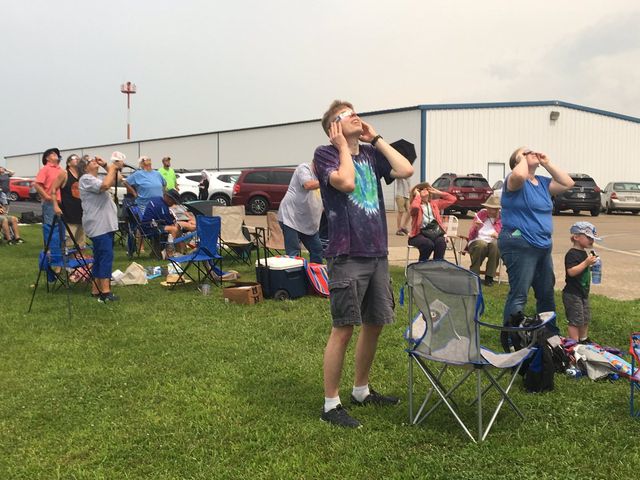 COLUMBIA - Gasps and cheers went up from crowds from around the world gathered across mid-Missouri for the total solar eclipse.

Tim Morgan came from Iowa to watch at the Boonville airport.

“It was a kind of light that I have never seen before, and to be with these people and share this experience was very exciting,” he said.

Will Appman came all the way from New Jersey to Gans Creek Recreational Area to see it happen. He could barely talk about how he felt about the experience.

"It was an incredible spiritual experience probably something I will never get to experience again in my life," he said.

Washington, D.C. resident Gerson Sher said it's hard to describe what it felt like.

Although totality was just a few minutes, the experience and its meaning are much longer lasting for Sher.

"You have a feeling you're part of the universe, which is a pretty awesome feeling," he said.

Nature almost didn't cooperate for eclipse viewers. Clouds in the northern part of the region made some people jump in their cars and head south.

“The clouds came in thick and we thought maybe we had missed our chance,” Morgan said.

But skies cleared just enough in many areas for the eclipse to be seen.

"Just moments before totality came, the clouds cleared away and we saw one of the most amazing things I have ever seen in my life,” Morgan said.

About 200 people watched from Gans Creek Recreation Area. Maine resident Jon Hunter was ten years old the last time he saw an eclipse. That was 48 years ago in Virginia Beach, Virginia.

"I remember getting in my car and driving 15 hours with my mother," he said. "Today's eclipse drew much more hype with all of the media coverage it got."

"I made sure to call her from the park to wish her a happy birthday," he said. "I let her know about the large crowd of people and the wonderful experience."

Gans Creek’s open fields were filled with telescopes of all shapes and sizes. The crowd was filled with passionate astronomers looking to get a glimpse of the eclipse with their high-powered gear.

Evan Chladny is a 15-year-old boy from Kansas City who aspires to become a meteorologist. He was prepared with a storm tracker app and binoculars to make sure nothing got in the way of him getting the best view of the eclipse. Chladny said he has been planning for the last four years.

"I've been looking at the weather and the best place to be for a long time now, Chladny said.” “It’s really nice to have a dad who could come here and watch this with me.”

Reactions were similar at Fulton High School, which was a hub for experiential learning for the event. Two dozen Arkansas college and high school students and their professors traveled to Missouri to launch a balloon to record data during totality.

Nine cameras were attached by different student groups to record data. All of the parts were assembled at Fulton High School Monday. In addition to photos, videos, time lapses, and a live stream back to NASA, temperature, atmospheric pressure and humidity were recorded while the balloon was in the air.

Tillman Kennon, Director of Research for Arkansas BalloonSAT, said the group is all about getting kids involved in science at an early age and giving them an opportunity to work on NASA supported projects.

Ed Roberts, Director of Educational Outreach for Arkansas BalloonSAT, said they choose Fulton High School as the place to launch the balloon based on “nearness to our homes in Arkansas, the fact that schools have good WiFi, the fact that kids would be present which is what we’re all about, and when we called the school they were very excited about having us come.”

The balloon is expected to come down in Williamsburg Monday evening, where the Arkansas BalloonSAT team will collect the nine cameras attached to the pipeline.

Monday's eclipse is prompting some people to become eclipse chasers.

Watching from Cosmo Park, Sydney Ruffalo from Wisconsin said, "Yeah, I really want to go and see the next one. I think I'll go in 2024. We traveled eight hours in a car and it was worth it."