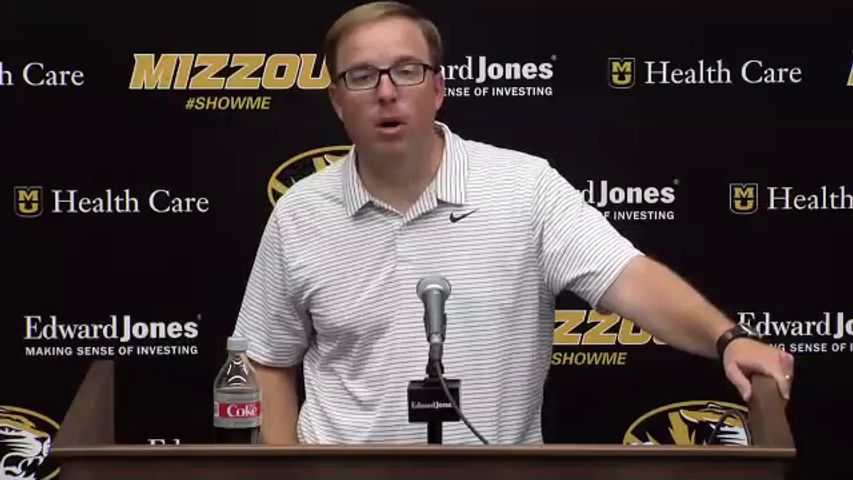 COLUMBIA- Missouri Head Football Coach Eliah Drinkwitz drew attention on Wednesday when he spoke up about the SEC's lack of a rule requiring teams to publicly disclose the number of players who test positive for the coronavirus.

Drinkwitz, who made the comments on the SEC's weekly teleconference, lamented the fact that while there are standardized testing procedures teams must adhere to there is no SEC policy regarding public reporting of those numbers.

SEC football teams are required to test for COVID-19 three times per week.  To this point teams have been allowed to create their own policies regarding the release of test results prior to games.

"I really don't know what's going on in the league as far as COVID or COVID-related numbers," said Drinkwitz.

"There's no uniform system on how we report it or people talk about it."

Many teams including Mizzou's week one opponent, Alabama, have declined to release the number of players and staff members who have tested positive for the coronavirus.

"Each week we have no idea what's going on with other teams," said Drinkwitz.

"It's kind of a free-for-all, as far as that goes," Drinkwitz added.

When asked if the lack of a standardized public reporting system of COVID numbers in the conference bothered him Drinkwitz declined to share his thoughts.

"That's a decision that's for people above my head and I'm not gonna wade into the waters on that one," replied Drinkwitz.

"Good try though, that was a good try."

Auburn Head Coach Gus Malzahn, who Drinkwitz worked for early in his career, supported the idea of requiring teams to publicly release their COVID-19 test results.

"For me, transparency is really good so I'd be for that," said Malzahn.

Drinkwitz has previously supported Mizzou's decision to make general COVID testing results public without revealing the names of people who tested positive.  During his weekly press conference last Tuesday, Drinkwitz called the release of such numbers a "public health issue, not a competitive advantage issue."