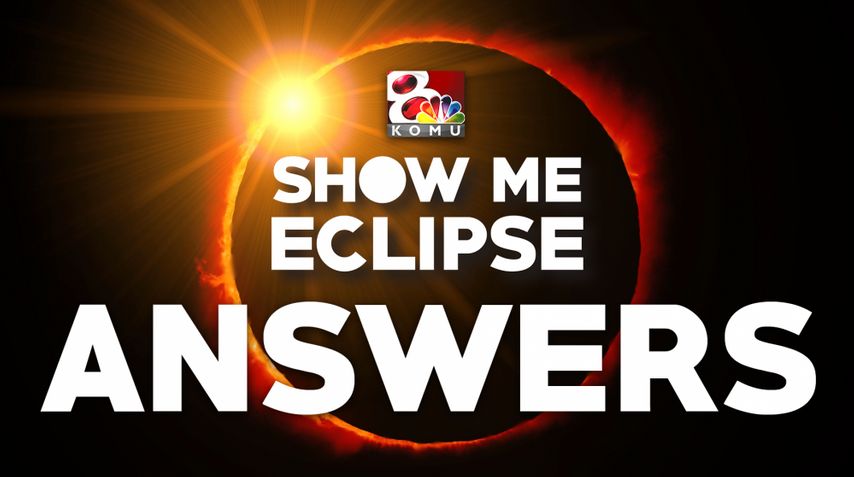 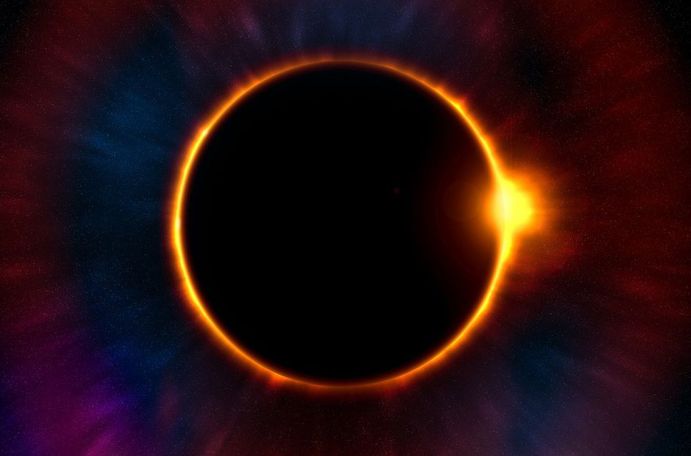 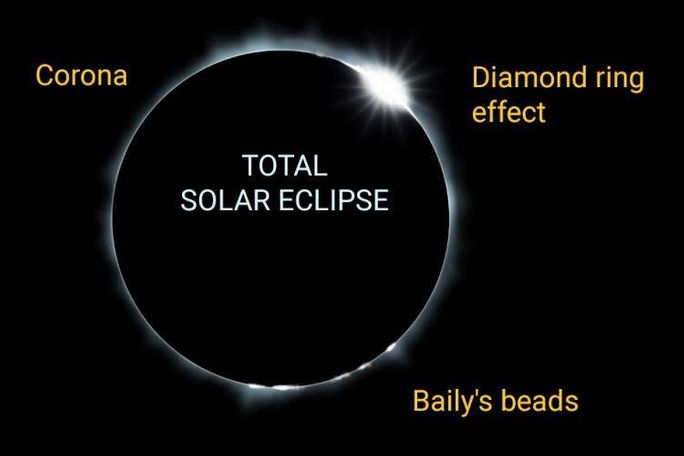 Watch for these effects during totality!

COLUMBIA - Have you heard the news? A total solar eclipse is heading to mid-Missouri! Join KOMU 8 as we dissect every angle of this rare phenomenon. Read up and prepare here and then watch the eclipse for yourself. We'll be LIVE with prep, reaction, traffic and more on August 21st starting at Noon.

KOMU 8 Chief Meteorologist Kenton Gewecke has compiled a list of fun facts and answers to some of the most commonly asked questions about the total solar eclipse.

You can watch the KOMU 8 Show Me Eclipse Special at the top of this story for visual explanations.

Our Show Me Eclipse homepage can be found at KOMU.com/Eclipse for continuously updated stories about planning, impacts, events and science - plus the weather forecast.

Where? Coast-to-Coast, Northwest to Southeast, across the United States of America

What time? We have mid-Missouri timing for you: CLICK HERE

You can also see what it will look like from your backyard HERE.

How rare is it really?

This is the first time a total solar eclipse has been over the state of Missouri since Aug. 7, 1869 (148 years), when one clipped the northeastern corner of the state. This is the first time over mid-Missouri since July 7, 1442 (575 years!!) although what is now Jefferson City was a few miles south of seeing totality that year. Remember, Missouri didn't become a state until 1821.

Although it is safe to say this is a once in a lifetime event, in a very rare occurrence, the next total solar eclipse over the United States will also hit Missouri, this time the southeastern corner, through Cape Girardeau. That happens on April 8, 2024 – less than seven years away.

But what is it exactly?

Those of us in the “path of totality” will be cast into an extraordinary shadow. Day will become night. Temperatures will drop drastically. Animals will think it’s nighttime. Birds will return to their nests. Flower buds will close. We will see stars and planets in the sky. Not to mention, the best sight of all, the Solar Corona. The Sun's light is so bright it blinds us from seeing its corona day-to-day, so it can only be observed during a total eclipse when the moon blocks out the Sun’s light and all we’re able to see is the Sun’s atmosphere, consisting of 2-million-degree plasma. Pictures don’t do it justice.

What will I see?

The night's sky! Planets, bright stars, constellations you would usually only see on a winter's night and a few great Sun effects.

Solar Corona: The Sun's atmosphere will be glowing around the eclipsed Sun during totality.

Diamond Ring Effect: A bright spot of the Sun's light will be the last thing before totality and the first thing after totality.

Bailey's Beads: The Sun's light will shine through the mountains, valleys and craters of the moon creating a pearl necklace-like light around the moon just before and after totality.

You can see a picture of these at the top of this story!

What if it is cloudy?

The sky will still turn to night. Temperatures will still drop, though slower than if it were clearer. Certain animals and plants will still react.

Why is this even possible?

How wide and fast is the path of totality?

It is different for each eclipse, but this year’s total solar eclipse will have a path about 70 miles wide. This shadow, called an umbral shadow, will be moving nearly 1,500 mph as it passes over mid-Missouri. Everyone outside of this path will only see a partial eclipse. In fact, all fifty U.S. states will see a partial solar eclipse as well as everyone in Canada and Mexico!

Will 99% totality be good enough?

Will traffic be an issue?

Be prepared for a lot more vehicles on the roads Saturday-Monday.

The last total solar eclipse over mid-Missouri was in 1442, nearly 380 years before Missouri would become a state. The last coast-to-coast total solar eclipse across America was 99 years ago. It’s safe to say back then technology was NOT what it is today. That being said, this eclipse will be the most widely observed and shared celestial event in U.S. history.

THINK ABOUT THIS: 12.2 million Americans live within the path of totality. More impressive yet, 80 percent of the nation lives within a day’s drive of totality, that’s around 264 million people – and that does NOT include international visitors. Missouri officials are planning on one million visitors (compressed into a 70-mile wide path).

Experts urge people to arrive within the path of totality a day or two in advance. But think about this - what if it's cloudy in St. Joseph, Missouri? Thousands will try to move Northwest or Southeast towards us. And while people will begin arriving in the path of totality sporadically the weekend before Monday August, 21st - they're all going to try and leave around the same time.

Can I watch the eclipse with my regular sunglasses?

NO! You must have special glasses in order to safely and effectively view the eclipse. As we know, while wearing your normal sunglasses day-to-day you shouldn’t be looking directly into the Sun; that same fact is true for an eclipse.

The only thing that makes this event a potential safety hazard is if you look at the Sun at any point outside of totality. Looking at the Sun's direct light will damage your eyes without proper protection.

Read our full story to make sure you have approved glasses - or you might be injured.

Where can I get these special glasses and are they expensive?

They are very cheap. In fact, they are made with cardboard. Though they may seem too cheap to be safe or effective, their special film is vital to keeping your eyes safe.

If you are unable to find approved solar eclipse glasses you have other options. Learn more HERE. Plus, it might be fun for the kids, too!

Will my phone be damaged?

Your phone should be fine. Have you ever been outside and left your phone laying in the Sun next to you? It was fine then and it will be fine now. Other cameras and video devices, however, may need special filters. And be sure to never look through a magnification device without a solar filter in front of the device, not behind it where your eyes are. The light needs to be filtered before it enters the device.

Communication may be hindered due to the oversaturation of phone lines. You can read about how companies are trying to help with that HERE.

If you want to take pictures or video on other recording devices you can read up on safety info HERE.

What are the different types of solar eclipses?

A total solar eclipse occurs when the Sun is totally covered by the moon. All you are able to see is a starry night’s sky and the Sun’s corona, or outer atmosphere. (See “But what is it exactly?” for more on the effects this eclipse entails.)

A partial solar eclipse occurs when the Sun is only partially covered by the moon. It will still look cool, but it is nothing compared to being in totality.

An annular solar eclipse occurs when the moon is too far away from the Earth to actually cover the whole Sun (it appears smaller than the Sun). This leaves a ring of the Sun’s light around the moon. This light is too bright for any effects of a total solar eclipse to appear.

Conclusion: while all of these would be worth a look, none can compare to the experience of a total solar eclipse.

How long is the event?

It will last for different amounts of time depending on where you live. There are two parts to the event: the partial solar eclipse and the total solar eclipse. To use Cosmo Park in Columbia, Missouri, as an example:

As you can see, the entire event lasts nearly three hours. However, the star of the show, totality, lasts for only a couple of minutes (if you are lucky). The times will be different depending on where you are along the path. You can see a list of mid-Missouri city and town times HERE.

What can I expect to happen in my environment?

Day will be slowly turning into night. The temperature will begin to drop when the Sun is half covered. Some temperatures may drop more than 10 degrees during totality! Remember, night will be rapidly forced upon the area - when you shut off the Sun's heat, temperatures must go down (assuming there is a lack of dense cloud cover). Animals and plants will act as if it is night: birds will return to their nests, flowers may close, etc. Street lights will turn on (and remember your car lights if you happen to be on the road [though you should do your best to be off the roads during totality for safety]). You will be able to see stars and a few bright planets. In fact, constellations you would usually see during a winter night will be visible on a summer afternoon! Winds may pick up as pressure changes slightly during to the temperatures changes. All of this for a couple minutes in the middle of an August day! Is anyone else excited or is it just me?

Will my pets be okay?

Animals know not to look at the Sun - that won't change on the day of the eclipse. Their eyes will be okay. Remember, the only reason it's a safety concern for humans is because many people will look at the Sun during the partial eclipse and without proper protection it will damage our eyes.

However, animals may become scared or anxious due to the shadows and the event in general, so it may be a smart idea to have them on a leash if outdoors.

How will animals react?

What can scientists learn from a total solar eclipse?

Scientists can learn more about the Sun's Corona, or atmosphere. What we see as the yellow surface of the sun is called the photosphere and has a temperature of 10,000 degrees F. The corona is the thin outer gaseous solar atmosphere far above the sun's surface and it can reach 3 million degrees F! How is this possible? Normally the further out from a source of heat the cooler the gas becomes? This is still unresolved by scientists! When the Sun's light is covered we are allowed to see and better study the corona. Hear from a NASA solar scientist and a former mid-Missouri Astronaut HERE.

What special events can I go to throughout the weekend and day-of?

Special events are being held throughout mid-Missouri and there are more details on our Show Me Eclipse page.

The forecast will be continuously updated on our dedicated eclipse forecast page.

MoDOT has a few safety tips below:

Watch the science behind the total solar eclipse in a 3D visual:

We sat down LIVE with the foremost eclipse expert to answer your questions!

Have a question not answered here?