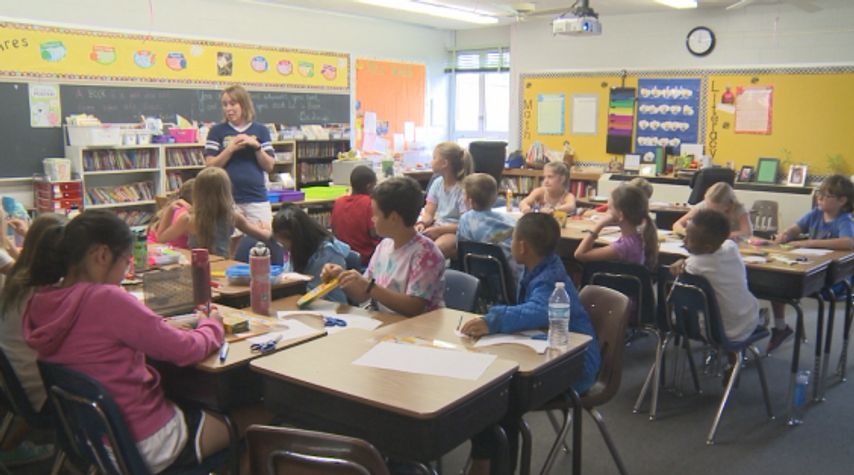 COLUMBIA - The total solar eclipse is coming on the fifth day of school, and Columbia teachers are trying to teach their students about it as best they can, particularly in elementary schools.

Columbia Public Schools provided its teachers with a wide variety of eclipse-themed activities and lessons for their classes. They cover almost every subject from math to social studies, but most are in science. District science coordinator Mike Szydlowski said it is usually hard to teach young students about something as abstract as outer space.

“One of the big things we’re pushing for is teaching science with phenomena,” Szydlowski said. “In other words, we shouldn’t just teach science for the sake of teaching science. We should teach it to explain something they actually get to see. And there’s no better phenomenon that I can think of when it comes to astronomy but a total solar eclipse.”

At Fairview Elementary School, Ragan Webb’s fourth-grade class has done hands-on activities such as “small moon, big sun,” she said. Each student held up a small object and tried to block their view of a globe with it. They had to stand all the way at the back of the classroom just to cover the entire globe with it. The goal of the activity was to model the size difference and the distance between the moon and sun.

Szydlowski said some students at some schools will use thermometers to track temperature changes throughout the day on Monday, and others will use small microphones to monitor the behavior of animals.

The eclipse fits into more than just the science curriculum. Some of the lesson plan options include art projects, reading articles about the eclipse and learning the history of what people used to believe about solar eclipses. Szydlowski said in past centuries, people were afraid of eclipses because they did not yet know the science behind them.

Both the eclipse and the interactive lesson plans have brought out enthusiasm in the students, Webb said.

“Whenever you can do something that makes the kids go, ‘Wow, why’d that happen?’, when you start kids asking questions about what they see, that is when real learning occurs,” she said.

Collin Wise and Ariana Willenberg, two of Webb’s fourth-graders, said they are excited about the eclipse and have learned a lot about it. Collin said it was interesting that the sun will still be shining when it’s dark and the stars will come out. Ariana said she learned that the moon’s orbit is not a perfect circle.

“If it were, every year we’d have an eclipse,” she said.

Szydlowski said some parents expressed concerns to the district that students might miss the eclipse. The district is requiring all students to be outside from 12:30 to 1:30 p.m. on Monday to ensure everyone will experience the once-in-a-lifetime phenomenon.

Peter Stiepleman announced as MASA 2021 superintendent of the year

COVID-19 vaccinations could start in November or December, Fauci says

'Every night is senior night': Southern Boone adjusting to the pandemic