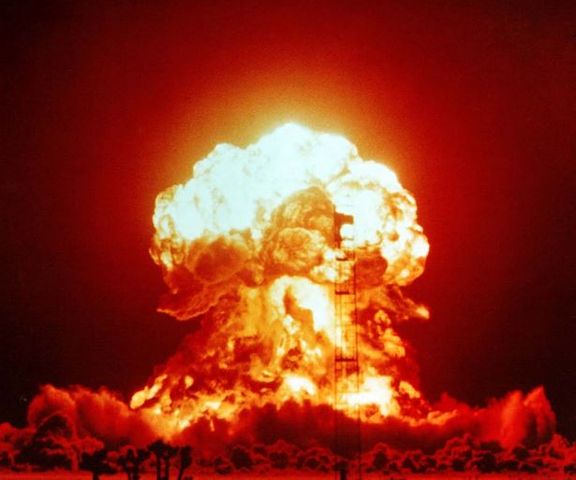 COLUMBIA – An expert from a group looking to eliminate all things nuclear spoke Tuesday to a crowd of mid-Missourians.

Ellen Thomas of the Women's International League for Peace and Freedom gave her lecture on the dangers of nuclear at the Boone County Government Center.

The talk was about the dangers of the use of materials for nuclear purposes other than for medicinal purposes.

"The water and the air and the soil are poisoned, and people get cancer, people get birth defects, people die from all sorts of things from this," Thomas said.

She also tried to drum up support for the Nuclear Weapons Test Ban Treaty, which Del. Eleanor Norton Holmes, D-D.C., has introduced in the U.S. House of Representatives every year since 1994.

Thomas's talk was also about the upcoming "Women's March to Ban the Bomb" on June 17 in New York City and throughout the country. The march will support the United Nations Nuclear Ban Treaty negotiations taking place from June 19 through July 7.

Recently, the U.S. and North Korea have been at odds as a result of President Donald Trump's talk of a possible attack on North Korea and the North Koreans' recent weapons tests.

"As far as North Korea is concerned, we are in very good shape," Trump said.

Thomas, however, said she is very concerned about Trump's actions and unpredictability with regards to nuclear weapons.

"He thinks he's doing business, but it's a lot different when you are, you know, doing diplomacy than doing business. When you bankrupt it's not that big a deal, but when you fail in diplomacy it could be a really, really big deal," she said.

Thomas's talk is a part of a series of lectures she is doing throughout the Eastern and Midwestern United States.