Expo brings kids face to face with dinosaurs and cavemen 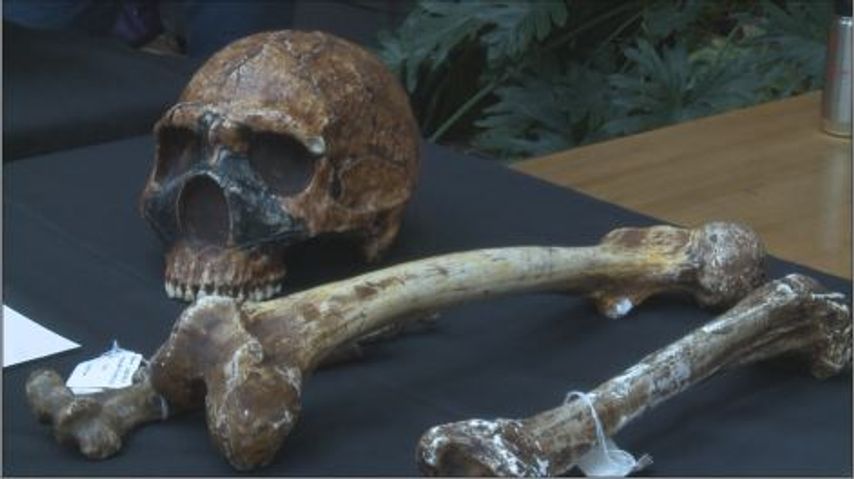 COLUMBIA - Gary Staab said he has the coolest job in the world. He gets to recreate dinosaurs for a living.

Staab is a paleo-artist, and his work can be seen in museums around the world.

"I get to sculpt animals for natural history museums," Staab said. "So, I get to go look at fossils, looks at bones, and then put the flesh on those bones."

Casey Holliday, associate professor of anatomy at MU, said almost everyone is familiar with Staab's work.

"If you've seen a life-size replica of a dinosaur or a whale, you've probably seen Gary's stuff," Holliday said. "It seems like he's done work for every museum out there."

Staab was the keynote speaker at the Sixth Annual Dinosaur and Caveman Expo at Rock Bridge High School. He also became one of the exhibits, live sculpting a mammoth during the expo.

"Today, I'm going to be making a very small mammoth, which is pretty oxymoronic in itself, but I want kids to help me out and get their hands in the actual clay to see what I do," Staab said.

This demonstration was a condensed version, but Staab said projects are time-consuming and tedious.

"These huge projects can take up to a year to create," Staab said.

In addition to Staab's presentation, the expo showcased fossils and bones from several different species,including a triceratops skull. Children could create cave art, learn about how fossils were made and see birds and reptiles who are direct descendents of the dinosaurs.

Holliday said Missouri is a great place to look for fossils.

"You can look in all the limestone escarpments around here to find fossils like corals and crinoids," Holliday said. "There's actually a dinosaur site down in the boot heel. But all along the creeks and rivers we get mammoths and bison, kind of 10,000 to 20,000 year old fossils that are still coming out of the more recent sediments in the river systems."

Carol Ward, an anatomy professor at the University of Missouri, said the event is meant to grow children's knowledge about the world around them.

"The most important thing for kids to learn about here is science," she said.

About 40 volunteers from places like the St. Louis Science Center, Raptor Rehab, and MU Department of Geology helped make the experience possible.

"Everybody loves fossils," Ward said. "With that enthusiasm we can try to teach kids how we do science, how scientists know what we know, and how we can learn about the world. That's a lesson that they can take to everything in their lives."

Ward said she expects a great turnout this year.

Visitors could also watch a show at Rock Bridge's Planetarium during the expo. Exhibits are scheduled to be open until 4:30 p.m. Saturday evening.