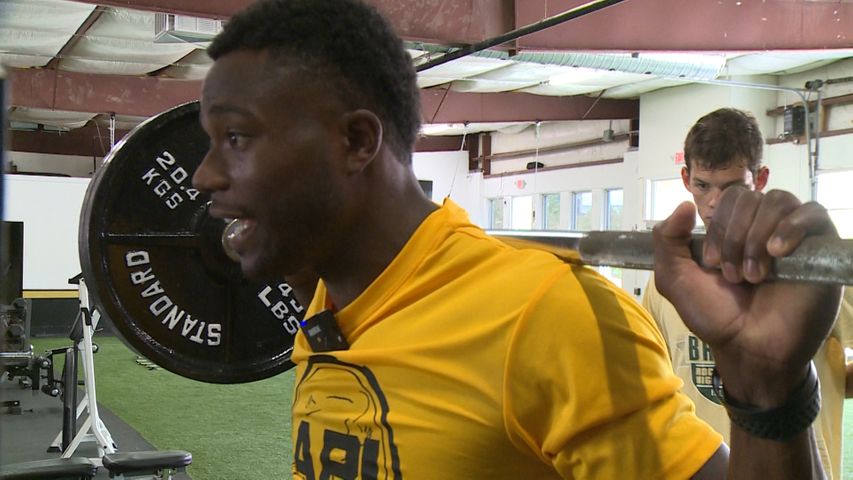 COLUMBIA - The high school football season is in full swing, but as former MU standout Jerrell Jackson says, it’s the work put in during the off season that translates to success on the field.

Jackson, a wide receiver at MU from 2008-2012, is an assistant coach at Tolton Catholic and the co-owner of Athletes’ Performance Institute (API) with his friend and former MU teammate, Michael Egnew.

In one-hour sessions, Jackson put the players through high intensity training including warm-ups, lifting, positional drills and an abdominal workout.

“I’m not seeing who can be great when you feel good and you’re not tired and you’ve got the focus,” Jackson said. “Who’s going to actually do the moves that we just repped out a million times even when you’re tired?”

“The one thing I find that can’t be replicated from here at API, is just that passion that I bring into these athlete’s lives to show, ‘you know what, I care about you. And I’m going to push you and I’m going to be hard on you but understand that I’m doing this because I want you to be successful at that next level.’”

For Tolton's Monroe Mills, the work has paid off.  He has already verbally committed to play college football at Oklahoma State.

“I came in here being awkward,” Mills said of his first experiences at API. “The tall kid that didn’t really know what to do with his body but they developed me into the player you see today.”

Jackson’s career as a professional football player equips him to provide a unique training experience.

After graduating from MU, Jackson signed as an undrafted free agent with the Houston Texans.

He also spent time with the Jacksonville Jaguars, Chicago Bears and Kansas City Chiefs before finishing his career with the Winnipeg Blue Bombers of the Canadian Football League.

After his playing days were over, Jackson went back home to Houston for a couple years before returning to Columbia and opening API with Egnew in 2017.

Egnew, who played tight end at MU from 2008 to 2011 and spent time with five NFL teams, is in his first season as the head coach at Tolton Catholic.

Between school, practice, scrimmages, film study and lifting, Sunday is often the only day off for a high school football player.

“It’s the kids coming in on Sunday, and those are the same kids that will look back and say, ‘I made it because I was putting in those hours,’” Jackson said.

“In order to get better, you’ve got to go against the top players in town and continue to push each other.”