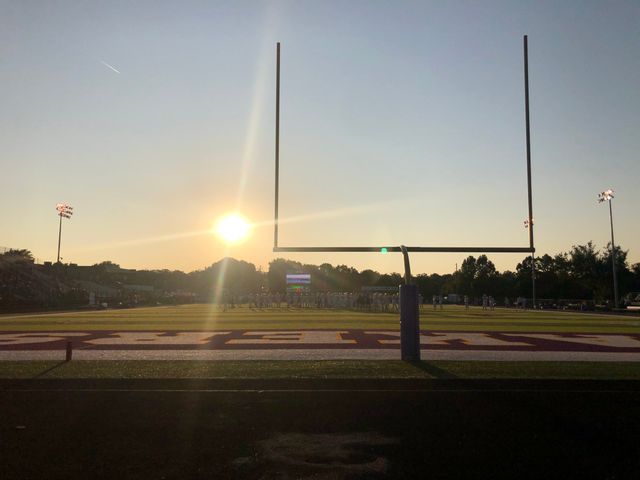 Welcome to Week 5 of Friday Night Fever! Our game of the week features the Eldon Mustangs travelling to Southern Boone to take on the Eagles. Southern Boone is riding a three game win streak while Eldon did not play last week due to COVID concerns.

Elsewhere, Class 3 #1 Blair Oaks take on #4 Valle Catholic in a battle of unbeatens. Blair Oaks has only scored under 50 points once this season while the Valle Catholic defense has given up a whopping 14 points total.

This live blog will feature photos and videos from high school football across mid-Missouri. All items with be in reverse chronological order with the newest information at the top.

The South Callaway Bulldogs dropped to a .500 mark last week after a conference loss to the Montgomery County Wildcats 41-20. Meanwhile the Clopton Hawks won 27-6 last week against the Louisiana bulldogs at home. ?@KOMUnews? pic.twitter.com/uRvZnZPbRx

The Camdenton High School Marching band and dance team performed before the start of tonight’s game! What a great way to show school spirit and get the crowd excited!!! @KOMUnews pic.twitter.com/7Inc4pwukP

Heading into game four of the season the Camdenton Lakers are 2-2 while the Bolivar Liberators have a better record with 3-1. @KOMUnews pic.twitter.com/fRs54QmcH2

Pleased to be in Sedalia tonight giving you live updates of the matchup between @HickmanHS and @scfootball. Stay tuned for more as we approach kickoff! @KOMUnews pic.twitter.com/99i0Sh0yze

The Pintos take on the Pirates as California plays at Boonville tonight. Kickoff is at 7pm. @KOMUnews pic.twitter.com/NcMThntXnY

I’m at North Callaway tonight for @KOMUnews as the North Callaway High School Thunderbirds take on Strafford! Check out what you need to know for the game below! Kickoff in just over 30 minutes #FridayNightFever pic.twitter.com/nC2retlXQK

The Camdenton Lakers host the Bolivar Liberators tonight at 7pm! I will be tweeting live updates and scores from game :) ?? @KOMUnews