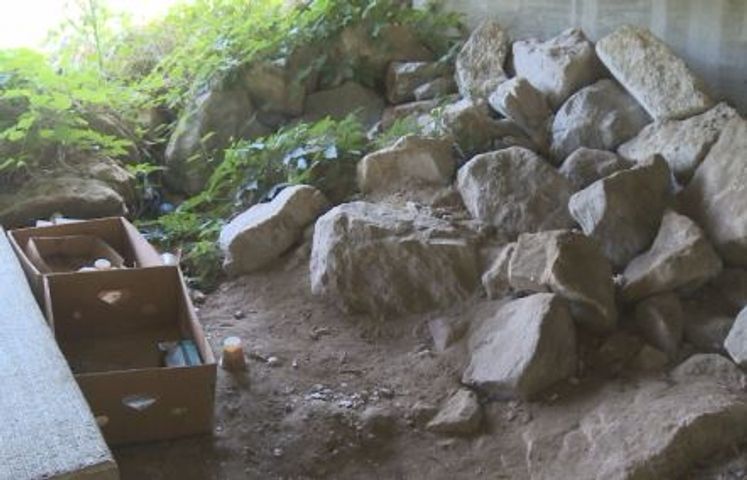 COLUMBIA - Homeless Columbia teens are changing the standard of what qualifies as shelter, as more make their way to outside camps.

After being contacted by viewers and speaking with local youth support organizations such as the Youth Empowerment Zone, KOMU 8 News has found that many homeless teens are taking shelter in wooded areas such as the one behind Columbia Mall.

"We were the first ones out there, and then afterwards everybody realized that it was a safe place to go, 'cause we were out there in one tent literally six months," Ickenroth said.

At 21 years old, Ickenroth has arguably experienced many hardships.

"I’ve been through every abuse possible. Literally from sexual abuse to physical to everything. I took most of it because of my brother and sister. Was put in foster care in 2009, I’ve lived in foster care ever since 'til I was the age of 18. Moving form home to home, was a regular basic thing for me," she said.

So, after years of frustration within the Missouri foster care system, she decided right around her 19th birthday, about the same time many teens begin to "age-out" of the foster care system, that the only available option to her lay with the outdoors of Columbia.

Ickenroth said the woods provided her with a better environment than any foster home, and the resources she needed to make her and her boyfriend's life work at the moment in time. He worked near the mallat the time.

"I had to figure out how to get him back and forth to work. So it was kinda I had no choice on what to do. I was either going to put myself at risk, or take a chance at losing the only income we had. And I wasn't going to lose that income," Ickenroth said.

Program director of the Youth Empowerment Zone, Katherine Wilson said teens seeking shelter outside is a more common occurrence than people realize. Wilson said in recent years her team has begun to recognize a correlation between foster kids in Columbia and homeless teens.

"What we found is that a lot of the youth, about three years ago we discovered, that a lot of our foster care youth were homeless," Wilson said.

Breaking down the numbers

According to Wilson, she estimates that around 85% of Columbia foster care kids end up homeless. Once homeless one of two things normally happens Wilson said.

"Most of them survive for a couple years on the streets before they actually either get themselves to a program such as YEZ or they hopefully not, but most time they offend. And so as an offender they end up being incarcerated," she said.

Wilson estimates there are around 75 young people currently homeless in Columbia.

According to the most recent homelessness data collected by the Missouri Balance of State Sheltered & Unsheltered Point-In-Time Count of Homelessness for 2016, mid-Missouri has the highest population of homeless in the state.

The January report shows that of the ten regions of the state examined, mid-Missouri had a total population of 441 battling homelessness, and Boone County had the highest population in the entire state with a population of 220.

The data also reveals that 6% of the homeless documented in the mid-Missouri fall between the ages of 18-24, and 2% fall beneath the age of 18.

Wilson estimates there are around six "camps" in the Columbia area.

Ickenroth said it's hard to keep track of how many "camps" there are for sure because the teens move frequently from one location to another, and that most teens like to think of the camps as more of a community.

"We work together to make what we call a community, and then when we figure out who can do what, we go from there. It's figuring out who has what skills to do what.

According to Ickenroth the skill sets range from hunting and making fires, to connecting with community support groups for showers and food.

Shelter from the elements often comes in the form of a tent or underside of a bridge.

"We literally bought a tent, popped it and stayed in it," Ickenroth said.

But tents do not provide protection from everything.

"When my ex wasn’t a round, if  I didn’t want to stay in the tent because I didn’t feel safe per se, I would always just climb up in a tree and sleep in a tree until I could see who was around me," Ickenroth said.

Given the camps are often on private property, and the teens could be charged with trespassing if caught, Ickenroth says accessing the camp can be hard but not impossible.

"As long as they stay on the low and go at night, nobody is going to notice them," she said.

"I think any college town, especially one on a major highway is going to have a teen homelessness problem," Trapp said.

According to Trapp however, that does not justify the issue.

"I think it doesn’t speak with for our community that we have not been able to support the agencies that are trying to address that issue, and it should be a high priority," he said.

Trapp said the fact there really is not any teen specific shelter options does not help.

"It seemed like we did a better job when we had a specific teen shelter. Even when there was a teen shelter, there was a wait list  and that doesn't body well for addressing homelessness," Trapp said.

Currently there is no teen specific shelter options in Columbia, and this frustrates Ickenroth.

"I would like to see more shelters. That will allow them to actually come and be able to make a change" she said.

Wilson agrees, but thinks the greater issue at hand is the lack of information provided to at risk-youth.

"We are not taking the time to make the youth aware of their options. They need programs that can assist them in their transition," she said.

According to Ickenroth, the few shelter options that are available are difficult to access, due to rules that many of the shelters have about not allowing teens with legal cases to use the shelter.

Ickenroth said she believes the rules are a direct result of misconceptions of homeless youth being violent.

"That they are violent, That they are no good, that they have nothing, and it’s not true, 'cause most of them are only out there because of certain situations they were put in.  It’s not like half of us could help the situations that put us there," she said.

According to Ickenroth, who is now in the process of applying for college and has recently accepted a new job, the only way homeless youth in Columbia can beat the odds put before them as she has, is if they seekout the resources available as she had.

"I’m not afraid to ask for help. I don’t take no for an answer, something I refuse to do. If I know there is a resource out there, then I’m going to use it," Ickenroth said.