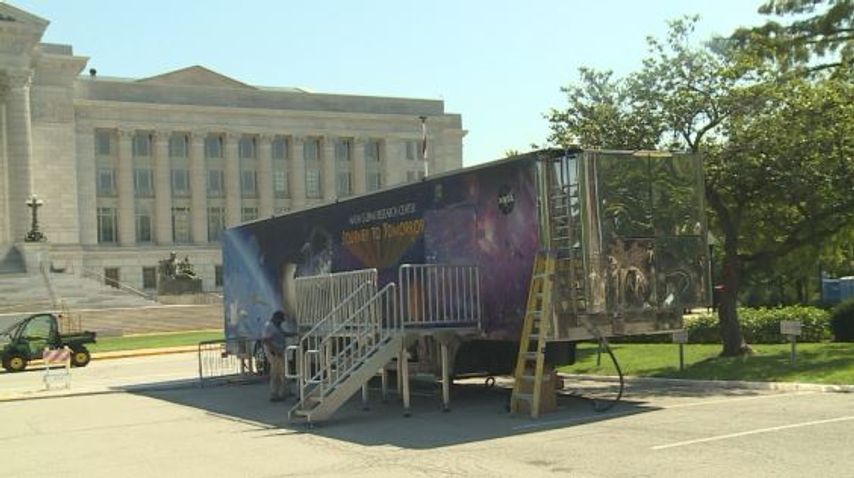 On the steps of the Supreme Court, they prepared the stage for NASA's live broadcast. In between the Supreme Court and the Capitol, they set up NASA's Journey to Tomorrow trailer. It features workstations with touch-screen computers that tell the story of NASA and its research.

"We have an actual moon rock returned by the astronauts in the Apollo 17 mission," said David DeFelice, the community relations team lead for NASA's Glenn Research Center in Cleveland. "And then we have a really neat globe display that shows the earth and can actually take you around a little tour of the solar system as well."

The 53-foot air-conditioned trailer is free and will be open to the public from 10 a.m. until 4 p.m. Sunday and Monday.

As for its live broadcast, NASA selected Jefferson City because of its central location in the path of totality, DeFelice said.

Two Missouri natives will assist in the broadcast. They are Dr. Janet Kavandi, a Springfield native the director of NASA's Glenn Research Center in Cleveland, and Col. Michael Hopkins, an astronaut and a Richland native.

Katherine Reed, communications manager for the Jefferson City Convention and Visitors Bureau, said the bureau has been planning for over a year now.

"They were generous and brought a limited supply with them," she said.

Monday's festivities in Jefferson City include the eclipse festival, a mini carnival and live entertainment.

Visit KOMU 8's Show Me Eclipse page for a complete list of eclipse events in mid-Missouri.