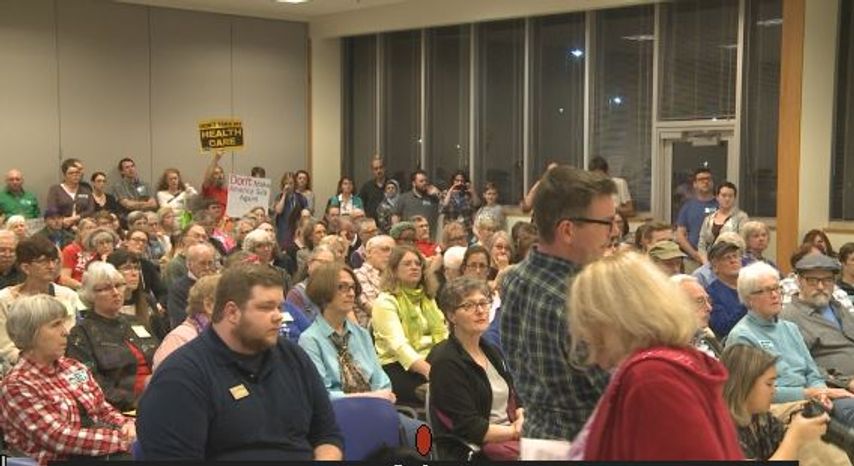 COLUMBIA – Emotions were high as people told gut wrenching stories about how they are affected by the Affordable Care Act; however, not everybody listened.

Advocacy group CoMo for Progress, a local advocacy group, hosted the meeting for constituents to voice concerns about the possible repeal of the Affordable Care Act, Medicare and Medicaid concerns and concerns about the funding level of Planned Parenthood. Sen. Claire McCaskill (D-Missouri) sent members of her staff to the meeting, but Sen. Roy Blunt (R-Missouri) and Rep. Vicky Hartzler (R-Missouri) declined invitations. One of McCaskill's staff members read a statement from her at the meeting, defending the controversial law that she voted in favor of in 2010.

The room was filled to capacity with most in attendance showing support for the ACA, which is sometimes referred to as 'Obamacare'. Some people at the meeting were holding signs, not only supporting the law, but supporting Planned Parenthood, which helped organize the meeting with CoMo for Progress. Most of the stories were about people's health care struggles prior to the ACA's passage and their fears if the law is repealed. Some speakers at the meeting also voiced concerns about the proposed replacements Republicans have put forward.

Speakers at the meeting also voiced their discontent with Blunt and Hartzler for not sending a representative from their office.

"I think that shows they're not being a very good representative. They need to come out and hear what people are concerned about. If they're gonna represent us, they need to be here," Jefferson City resident Michael Lester said.

Lester, whose daughter relies on the ACA for health insurance, said he is against repealing the law because he is concerned about many people losing their insurance.

According to CoMo for Progress organizer Rebecca Shaw, Hartzler's schedule did not permit her to attend the meeting.

"This is going to affect people, especially in Boone County. We hear that they want to keep [the ACA] and maybe make it better somehow, and they want their Congressperson and Senator to hear their concerns," Shaw said.