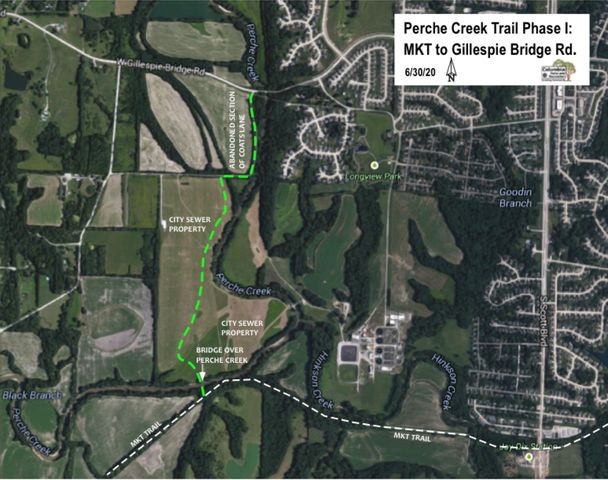 "The proposed Perche Creek Trail will be about eight or nine miles long along the Western side of Columbia," park development superintendent Mike Snyder said. "This is the first phase of that. It'll be about a mile in length."

The first phase will connect an abandoned road off of Gillespie Road, run south along Perche Creek and connect with the MKT trail. The trail will be made of concrete and include a bridge that runs over Perche Creek. The budget for the project is $1.2 million.

"The earliest we could get started on work would be late fall or spring of 2021," Snyder said. "That'll probably take around, oh, six months for construction."

The proposal has been on the trail master plan for over 20 years.

"It's been conceptually planned for a long time," Snyder said. "As far as actually the construction drawings and the detail planning that's going into the exact route we have right now, that's been ongoing for, oh, a little over a year now."

58-year-old Scott Mullins lives off of Gillespie Road and enjoys riding his bike with his dogs in his free time. The new trail proposal will make for an easier commute to a bike trail.

"We take that spur that goes along Perche Creek and crosses Scott Boulevard, you know. That's our access points now," Mullins said. "This will make it a lot more handy for us really to get right on the trail."

The trail is part of a future plan for a 30-mile loop that will go around the city of Columbia.

"This 30-mile loop that's proposed around Columbia is one of the things that really could put Columbia on the map as a trail destination community," Snyder said.

The public input meeting will take place at Jay Dix Station from 5 p.m. to 7 p.m. People like Mullins are encouraged to give suggestions for things to be included in the first phase of the new trail.

Mullins is concerned there won't be a place to park where the proposed trail ends on Gillespie Road.

"My other concern is that the trail may not be as accessible if there's not a parking area for people to stop and, you know, get their bikes ready and stuff," Mullins said. "I may go just to give a little input."

For people who were unable to attend the meeting, they can still give suggestion through an online survey by July 15.