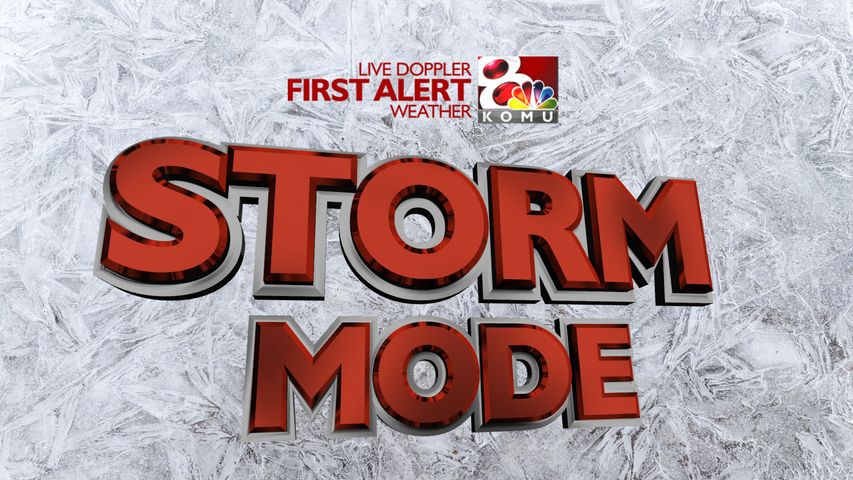 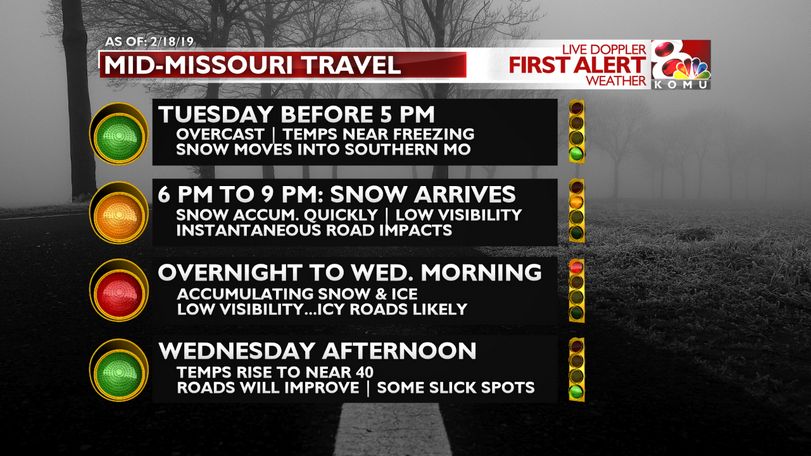 FINAL UPDATE: Snow, sleet, freezing rain will continue overnight and exit between 6-9am on Wednesday morning. Freezing drizzle is also possible. The morning commute is expected to be icy for a large portion of mid-Missouri, on untreated roads and surfaces. Temperatures should warm above freezing around 9am and continue to the upper 30s around 40 from noon through the afternoon, melting ice and some snow. A refreeze is expected Wednesday night.

You can view the full in-depth forecast 24/7 at: komu.com/weather

COLUMBIA - Another week in Missouri in the 2018-2019 winter weather season means another winter storm system. This particular system won't drop much snow or much ice over the region, but due to the combination of the two and the potential impacts to travel, it is still a system to respect.

Moisture is moving overhead this afternoon but is fighting through a very dry lower atmosphere. Snow onset is most likely between 6pm and 10pm from south to north through mid-Missouri, when the atmosphere finally becomes saturated.

Snow will fall at a moderate speed and winds will gusts around 25 mph. This will lead to low visibility. It will begin accumulating on surfaces pretty quickly after it begins to fall. It will be more of a wet snow. This is because temperatures at the surface will be within two degrees of the freezing mark most of the night.

Eventually, between 9pm and midnight, warmer air will infiltrate the system. This will force snow to change into sleet (briefly) and freezing rain. This will create ice accumulations on surfaces and will wash away treatment on roads.

The entire system is expected to exit between 6-9am on Wednesday morning.

We remain in a Storm Mode 3 (0 to 5 scale) due to snow and icing creating difficult traveling conditions overnight and Wednesday morning. It's not a lot of snow nor a lot of ice, but the combination is worrisome. #mowx pic.twitter.com/QRN8Bezedb

Areas along and south of the I-70 corridor will see more sleet, freezing rain and regular rain than snow and therefore snow accumulations will be lower, with 1 to 2 inches possible. Then, a glaze of ice up to 0.10" is possible. The lower accumulations are also because temps could periodically warm enough to produce regular rain, melting some of the previous accumulation. The further south of I-70 you are the better chance you have at an okay Wednesday morning commute.

Less snow but more wintry mix (sleet & freezing rain) will fall within the I-70 corridor and south.
Regardless, most will see snow to begin, blowing thanks to gusts around 25 mph, followed by freezing rain and icing. Road treatment will wash away. Use caution if driving. pic.twitter.com/Wls9aMXrLP

We'll be tracking temps very closely. Slick road conditions are expected Tuesday evening through Wednesday morning, until temps go above freezing close to 8-10am. Travel is not encouraged during this time. There will also be blowing snow due to winds gusting around 25 mph; visibility will be low.

The good news is that temps should warm above freezing by late morning on Wednesday and this will leave the noon and afternoon commute in much better condition. Some areas may reach near 40 on Wednesday.

Here's a rundown of travel impacts tonight and Wednesday morning.
The worst roads will be in central and northern MO on Wednesday morning. Warmer temps south of the I-70 corridor should help those areas have an okay morning commute. All depends on a couple degrees... pic.twitter.com/0nciJJp23X

Are you ready for spring? There is a good chance for spring-like rain showers on Saturday with high temps near 50.

You can view the full in-depth forecast 24/7 at komu.com/weather.

Video: How The Four Types of Precipitation Form

Cold weather frustrates some, brings joy to others