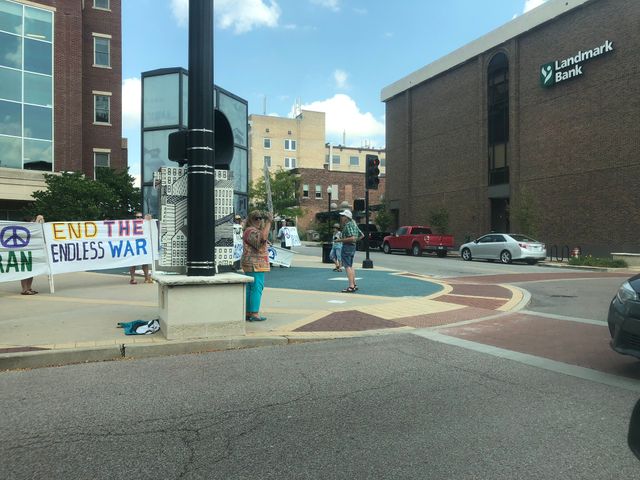 COLUMBIA - In honor of 9/11, members of Mid-Missouri Peaceworks held up banners and stood in front of Columbia City Hall to promote peace and condemn the War on Terrorism.

Peace advocates rallied together to commemorate 9/11 and bring awareness to its current impact on foreign policy. Peaceworks leaders said 9/11 plays a large role in the wars the U.S. is currently fighting.

"We are now ending our 18th year of violence, of war," John Betz, Mid-Missouri chapter president of Veterans for Peace, said.

"We saw these horrific terrorist attacks on the Pentagon and World Trade Center. That was used to justify going to war against Afghanistan, who's government had not attacked us and Iraq who had nothing to do with it," Mark Haim, director of Mid-Missouri Peaceworks, said.

President Donald Trump requested $750 billion for the FY 2019 defense budget. Peace advocates said the government is spending too much money on military endeavors. Overall, the defense budget has $716 billion for 2019.

"Trillions of dollars," Betz said. "We haven't ended anything."

Leaders from both Veterans for Peace and Peaceworks said they want to see more peaceful ways of moving forward, including building stronger alliances with other countries.

"We don't need to make wars that kill hundreds of thousands of innocent civilians and make more enemies than we eliminate," Haim said.

Haim said the government is not focusing on domestic issues, such as affordable housing and healthcare.

Haim said people can make a difference by voting in elections and contacting their elected officials.