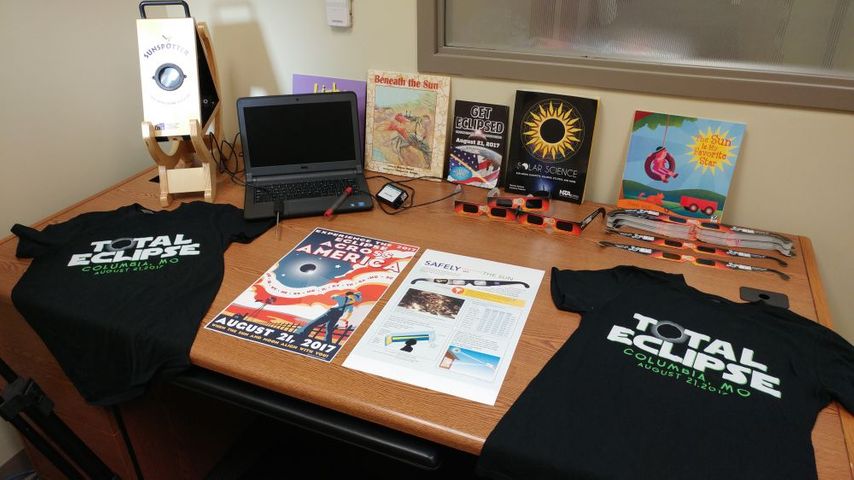 COLUMBIA – As students prepare to make their return to public schools and universities next month, thousands in mid-Missouri will come back to lesson plans and activities on the coming total solar eclipse.

The eclipse will move in the path of totality in a 70 mile swath across Missouri. It is expected to move through the state shortly after 1 p.m. while hundreds of schools begin their first day or first full week of classes.

“Eclipses happen somewhere on the planet every year, but they don’t happen in any given place very often,” MU director of astronomy Angela Speck said. “As the university, it’s our job to be able to provide educational opportunities, and it would be a huge shame if we didn’t make the most of it.”

Serving on the NASA Science Panel for the eclipse, Speck co-chairs part of a national task force that allows her to organize materials and resources necessary for teachers both within and outside the path of totality nationally.

She said classes have not been canceled for MU on eclipse day, although she has reached out to all faculty to reschedule classes on the first day as necessary for everyone on campus to experience the eclipse.

Speck said locations that look south without a building obstruction, such as Carnahan Quad and Traditions Plaza, will be prime viewing spots. But she expects campus to be much more crowded than even the busiest days at MU.

“One of the things I have to do at the national level is to help people figure out how to predict how many people are going to come, and how to handle that,” Speck said. “We are actually predicting that most places in the path of totality are going to double their population, and we could go as far as quadrupling the population just in terms of where and how good our location is.”

More than 30 public schools in Columbia will design age-appropriate activities and experiments for students leading up to the eclipse. The assignments could range from early-elementary students making paper plate models to high school students setting up digital experiments to learn about the eclipse’s effects on temperature and animal behavior.

Mike Szydlowski, Columbia Public Schools K-12 science coordinator, ordered 30,000 eclipse-viewing glasses for students and staff in the district. He said the administration is fine-tuning lesson plans to extend beyond the science department with educational opportunities for language arts, social studies and math.

He said it's important that students to get a complete perspective on the eclipse.

“We just want them to see that there is a rhyme and reason to what we know today,” Szydlowski said. “We don’t know everything, but in this case, we know quite a bit, and they’re going to be the next people who might learn those new discoveries.”

Smaller public school districts, including Miller County R-3 Schools in Tuscumbia, are just a few miles outside of totality and are preparing for a field trip to experience the eclipse in whole.

Randy Gum, K-12 principal for Miller County R-3 Schools, said he has worked with the superintendent and transportation department on a plan to bus up 200 students to a Jefferson City park. He said he wants to give the students a childhood memory, but also stimulate curiosity and life-long learning.

“This is a rare opportunity, so when you have this type of opportunity, you want to do everything you can to support the community,” Gum said. “The sun is out everyday, but this allows us to look at it with a new light and experience it first-hand.”

Other institutions if offering digital streams for those who may not experience the total eclipse first-hand. William Woods University in Fulton will set up a Facebook Live video display on a campus telescope and broadcast the sun during and after the total eclipse.

Joe Kyger, assistant professor of chemistry at William Woods, said the university would also provide optics to help students and faculty view the eclipse on campus, but said the telescope would provide a close view of the sun’s corona with help from a solar filter.

“We’re going to attempt to broadcast live out to all the areas with the Fulton community’s efforts so everyone can see what’s going on instead of one person at a time because that would not work with the time frame we have.”

William Woods is also leading a freshman orientation around a solar eclipse theme the week before. Kyger said the school’s events add to the anticipation of the total eclipse throughout mid-Missouri.

“It’s such an exciting natural phenomenon that it’s going to garner a lot of attention for the students,” Kyger said. “Anytime you can get a real tangible connection to the sciences, it’s a learning experience, and it gives us another opportunity to highlight our university.