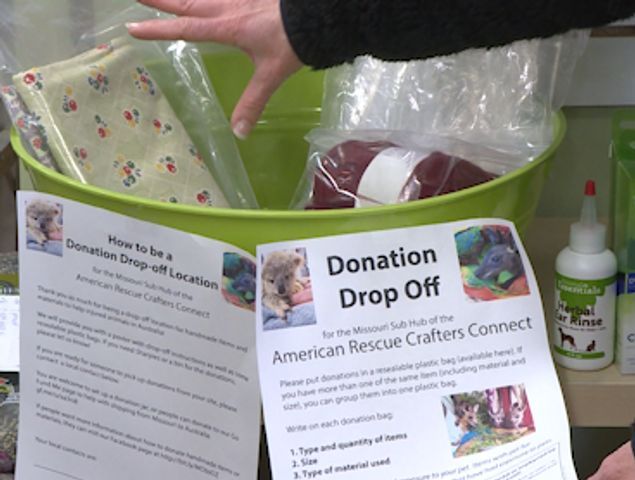 COLUMBIA — Local efforts, all the way from Kansas City to St. Louis, are being made to help animals suffering from the Australia bushfires.

"This started as a national effort called the American Rescue Crafters Group," Hayes said. "They started out in the national capacity, but pretty quickly they had over 50,000 members within the space of a week. They realized they needed to divide this into regions and down into states."

Hayes decided to volunteer and step up to the plate, managing the efforts in Missouri.

"We are seeing heartbreaking images come out of Australia and everyone wants to help, so as soon as crafters know there is a cause, they are going to get on there and start working on it," Hayes said.

Hayes also coordinated drop off locations to donate yarn and cloth all around Missouri. The bigger locations include Kansas City, Columbia, St. Louis, and Springfield. Hayes goes around Missouri picking up the donations made and sends them over to the regional hub in Northwest Arkansas.

One crafter contributing to the effort is Lacey Erbschloe, a graduate student of Columbia College. She said she didn't know a lot about the bushfires until she saw the Facebook group.

"When I saw the number of how many animals have died, I just knew I immediately needed to help," Erbschloe said.

Erbschloe gathered a few of her friends to make pouches for baby kangaroos.

"What is really cool about this is that it's not just for experts, it is for everybody," Erbschloe said. "I think it is nice whatever you are making is going to help an animal in need."

Hayes said Australia is trying to focus on their rescue and caregiving efforts, meaning they can't give as much time counting and looking at the donations.

"We can inventory items, make sure they are made correctly with the appropriate materials, and then once we identify the need and where they need to go, we will send them on from there," Hayes said. "That is the main purpose of coordinating this effort the way we do."

Hayes started a GoFundMe page where the money will help with shipping items from the U.S. to Australia. Hayes said even if you are not a crafter or don't have time to craft, monetary donations also help.