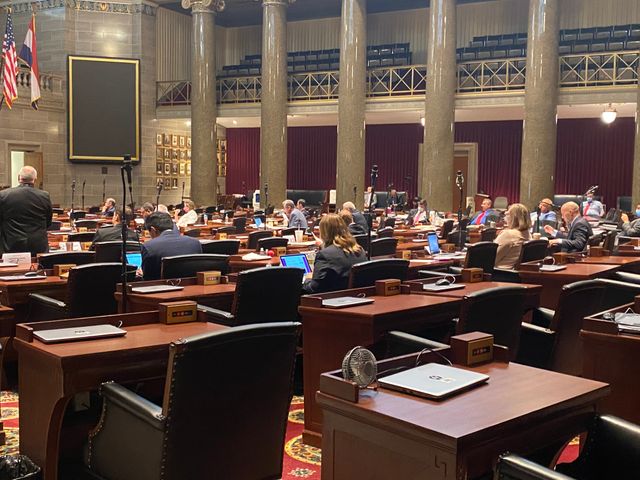 Today, Missouri lawmakers are discussing the financial implications of an amendment intended to help individuals gain Medicaid who may not have originally qualified for it.

JEFFERSON CITY – Missouri lawmakers discussed the financial implications of an amendment that would expand Medicaid eligibility for people within the state.

Missouri auditors said that it would cost an estimated $ 200 million up front, but save $1 billion annually.

The amendment would also help people between the ages of 19 and 64 whose income may be at or below 133 percent of the federal poverty level become eligible for Medicaid.

But lawmakers aren’t the only ones interested in this change.

On Tuesday, EMTs and other first responders came to Jefferson City to endorse Amendment 2 in the August 4 election.

"Yes on 2" is the name of a campaign working to expand Medicaid coverage in the state.

“When we have the rural hospital closures that we’ve had over the last decade... that makes EMS workers' job that much harder,” Jack Cardetti, spokesman for the Yes on 2 campaign, said.  "Because when you are dealing with a patient that’s having a stroke or heart attack driving an extra 45 minutes because the local hospital is closed down literally could be the difference between life and death.”

First responders are in support of the new proposed amendment because they believe it will help make their jobs significantly easier —especially in the current COVID-19 era.

Both I-70 Community Hospital in Sweet Springs and Pinnacle Regional Hospital in Boonville were rural hospitals which closed in 2019 and 2020.

Another goal of the campaign is to help Missourians who have jobs but don’t have health insurance. This amendment would help those individuals who would typically make too much to qualify for Medicaid easier to attain it.

It would also prohibit placing greater or additional burdens on eligibility or enrollment standards on people covered under Medicaid Expansion.

“We’re trying to ease suffering, save lives, improve the quality of healthcare for citizens across Missouri and get them access to primary care so they don’t wait to access the healthcare systems when they’re in crisis.” Duncan said.

The amendment would require state agencies to take as many actions as needed to maximize federal funding in medical assistance under Medicaid Expansion.

Currently, the Medicaid eligibility is set by a state statute, but the amendment would add Medicaid expansion to the Missouri constitution.

If the amendment is passed, it will not have a direct impact on taxes, according to the ballot measure.

The primary election will be on August 4.