Missouri Mom Tries To Pass Law To Save Newborns' Lives 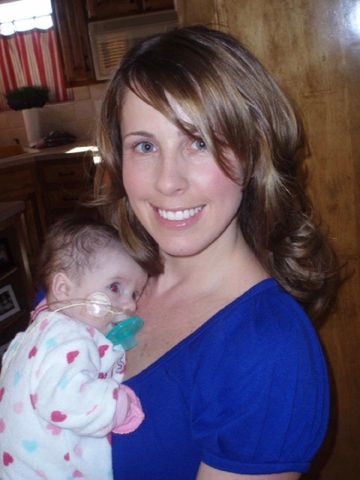 Congenital heart defects are the most common birth defects in the U.S., but Missouri is one of many states that does not require hospitals to do a test that detects CHDs once a baby is born.

The test is called pulse oximetry screening and it determines the amount of oxygen levels in the blood. Low oxygen levels typically indicate a newborn has a CHD and about 40,000 infants are born with CHDs each year.

Kelly Manz, a mother in Kansas City, is trying to get a law passed for Missouri to mandate that all hospitals do the screening on every newborn. Her four-year-old daughter Chloe was born with a CHD. Manz said Chloe's CHD would have gone undiagnosed had she not insisted doctors do the screening.

"I just felt like something wasn't right. She didn't look like she was breathing well to me. She wasn't taking very deep breathes and so I mentioned it to the nurses," Manz said. "After a few hours of insisting that I just felt like something was wrong they finally took her back to the [nursery] and that's when they did the pulse oximetry screening and then that led to them to see that her oxygen levels were low."

Dr. Bernard Eskridge, an MD for MU Children's Hospital, said pulse oximetry screenings typically take a matter of seconds and many, if not most, hospitals already have the equipment.

"We already had a pulse oximeter. We had a means to do this testing without any incurring any cost to us or the patients, so we thought it would be something good to offer our patients and offer some peace of mind," Eskridge said.

"All we're doing is having a light shine through a foot or a hand. There are going to be infants that we can pick up who have heart disease that is severe enough that would potentially require surgery and who, if we didn't catch, would come in very sick, potentially even on the verge of death," Eskridge said.

Although some hospitals understand the importance of the test, this is the fourth year in a row Manz has tried to get Chloe's Law passed.

"It's been frustrating and it's been a lot of hard work and because I've always believed that it's such an easy test and it's painless and it costs less than a diaper change and the hospitals already have the equipment to do it. So, I just don't understand why every newborn cannot be screened for this, why it's not a law," Manz said.

Governor Jay Nixon proclaimed January as Missouri Birth Defects Awareness and Prevention Month and also recognized February 7-14 as Congenital Heart Defect Awareness Week. Manz was there for the proclamation and said she feels very close to getting Chloe's Law passed.

"We have a ton of support from the community now, March of Dimes, American Heart Association, the American Academy of Pediatrics...," Manz said. "We really hope that this will be the year."