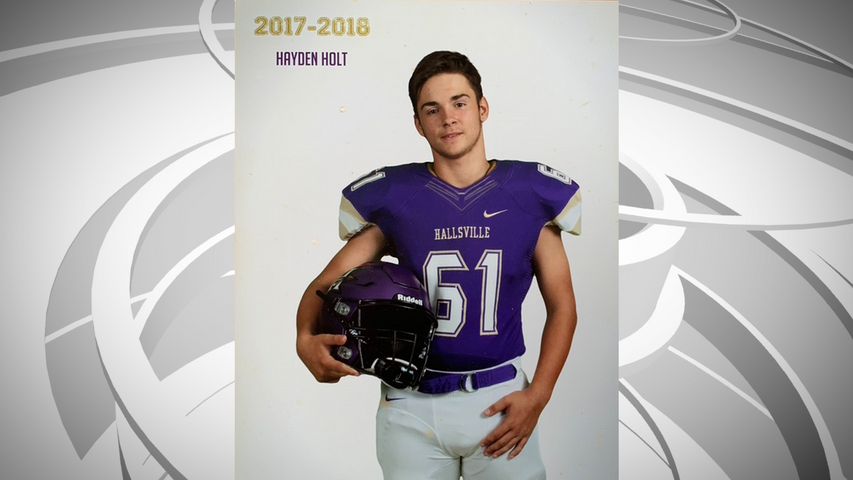 HALLSVILLE - Kari Hallowell, the mother of 17-year-old Hayden Holt, who died in an overnight car crash after being chased by police, remembered her son fondly Friday.

"Hayden is very charismatic," she said. "Everybody loves him even though he is kind of an ornery kid. And he is still a kid and that's the fact here."

Holt was a former student at Hallsville High School. His mom said he was upset he would miss out on football his senior year. She said he loved to play the sport.

"It was life," she said. "He would eat, breathe, sleep football and he was good at it. He was proud of himself for his football."

Hallowell also said her and her son were very close.

"I said many times Hayden was kind of the kid that saved me," she said. "I have three kids that I love very much, but Hayden was the one that always pulled me through my bad times."

She also said he never failed to show his affection.

"It was always 'I love you' and 'I love you mom' at the end of every conversation or anytime he left," she said.

Hallowell has created a gofundme page to help pay for Holt's funeral costs.

"Regardless of his mistakes, he is still my child and he deserves to be put in a good place," she said. "I work seasonally so I am actually laid off right now, I don't work in the winter time, I don't have extra funds to be able to pay for funeral services and I just want him to have a good service."

John Downs, Superintendent of Hallsville School District, said resources will be available for anyone who needs them.

"Although school was not in session today, the district's counselors are and will continue to be available to support our students and staff members in addressing grief," he said.

The Columbia Police Department released a report about the incident, stating that the car chase started after Holt went through a red light without properly yielding.