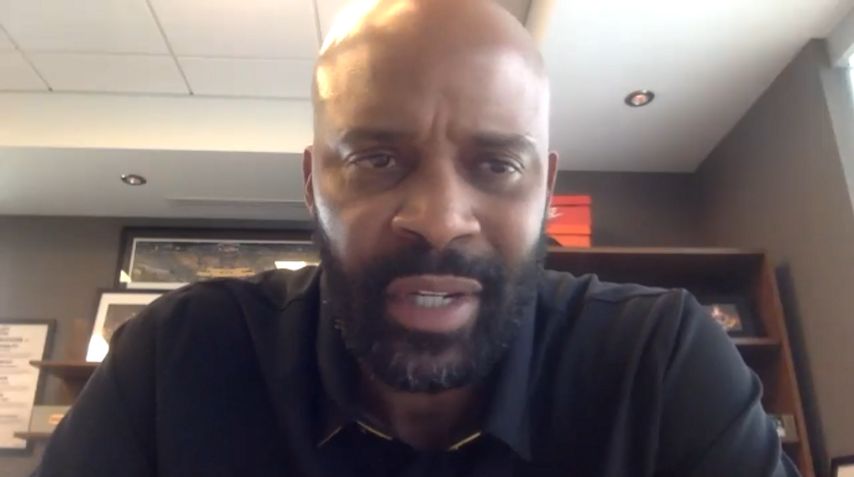 COLUMBIA — MU men's basketball coach Cuonzo Martin covered a wide range of topics during Friday's media availability, including concerns over player safety and ways to get the team ready for the upcoming season.

One of the topics Martin touched on was the decision by the NCAA Playing Rules Oversight Panel to allow student-athletes to wear patches on their uniforms to show support for social justice issues.

The NCAA released a statement Thursday saying the patches must be placed on the front or sleeve of the uniform. The patches are intended for commemorative and memorial purposes.

"I've been in talks with, you know, oversight committee, NABC, we've talked about those things," Martin said. "I hadn't talked to anybody at Mizzou and we hadn't talked in the SEC about it."

Martin says the Southeastern Conference could come together shortly to discuss the possibility of conference-wide patches.

"I would imagine the SEC, we'd do something or would like to do it as a whole, as a conference," Martin said. "They might say you guys can do what you feel like as a university, respectfully."

The NCAA statement says not everyone on the team is required to wear the patch, but they must be identical for those who chose to wear them. Martin says if the university will allow the team to wear patches this season, every player would wear the same patch.

"If we do it, it'll be a part of our uniform, so we'll do it together," Martin said. "I think that's only right when you're playing a team sport."

Former Mizzou forward Kevin Puryear says a lot of the current players he still keeps in touch with have been talking about these injustices amongst themselves and want to use their platform to speak on racial injustices.

“There are a lot of guys, especially a lot of athletes, black ones in particular, that feel a certain way about these issues and maybe not have the courage to speak up about them,” Puryear said.

Puryear says the patches are a good way for the players to use their platform to speak on racial injustices.

“I really think that, that this is obviously really good because it gives, it gives the athletes a voice,” Puryear said. “Athletes, especially collegiate ones, are, they’re like superheroes in the community.”

Another Mizzou basketball alumni, Cullen VanLeer, was a freshman when the racial injustice protests took place at the University of Missouri in 2015. He says the university has come a long way since then.

"It's a product of probably the leadership that we have," VanLeer said. "I know when Coach Martin initially got the job, he said 'it's not just a place where it's not just about basketball' and he felt like he could really make, help make change just beyond basketball."

VanLeer also says he's a fan of the NCAA's decision to allow the student-athletes to use their platforms to advocate for social justice.

"It's a good step by the NCAA to allow all the student athletes to brand however they would like to," VanLeer said. "I know Coach Martin is a big supporter and a leader in that lane of social justice and movement."

Martin talked about how important it is for him to use his platform to raise awareness on the different social issues that he is passionate about.

“The right things for all of us can be uncomfortable,” Martin said. “We talk about different movements, Black Lives movement, this movement, why this, why that. I think the movement is the truth.”