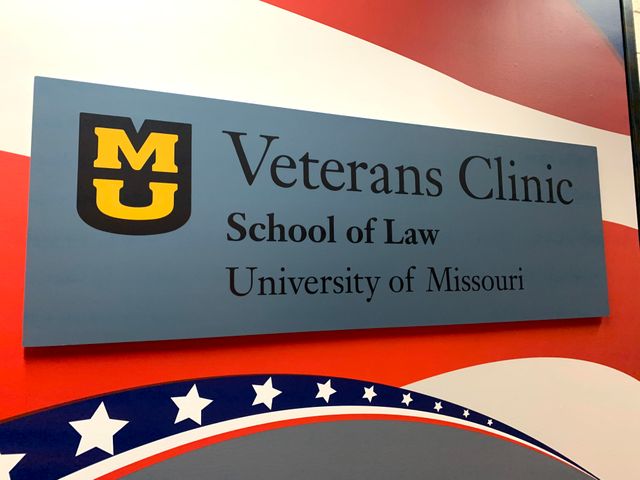 COLUMBIA - Each semester, 16 University of Missouri law students and two faculty members work to help veterans get benefits, and they do it for free.

That’s the mission of the MU Law Veterans Clinic.

“We exist because we want to help the veterans that served our country, and that's our sole focus,” Clinical Director Brent Filbert said.

They pursue discharge upgrades when a veteran has what is called an Other Than Honorable discharge. With this classification, the veteran is not eligible to receive benefits from the VA or use the GI Bill, which Filbert said sometimes makes it difficult to find a job and “puts [the veteran] on the path to not having a life that they would want to live.”

Filbert works with Angela Drake, the first director of the clinic, to supervise the law students.

The clinic started in 2014, and in the years since, it has grown to be one of the best in the nation.

“If you're thinking about football, there's Division 3, Division 2, Division 1, and there's Power 5,” Filbert said. “Then there's, like, the top 5. The Mizzou Veterans Law Clinic is literally in the top five in the country.”

Assistant Dean Emeritus Bob Bailey echoed this praise. He said it is one of two marquee programs the MU Law School is known for, the other being the Center for the Study of Dispute Resolution.

Bailey has been associated with the clinic since its first days. He was the one Drake approached when she wanted to transition from private practice to education.

Bailey said Drake was motivated to start the clinic because her father died while serving in Vietnam, and she attended law school on funding from the GI Bill.

The clinic is run like a law firm, which gives students the hands-on experience they need to be prepared to practice law full-time. Since its founding, the clinic has directly helped more than 140 veterans and indirectly assisted more than 400 more veterans.

Filbert said almost all those veterans live in Missouri. For those who live in other parts of the country, he said they often have a tie to the state, like relatives who live here.

Bailey said the clinic holds special importance for him because he and Filbert are the only two MU law faculty members who are also veterans.

“I genuinely believe veterans have earned these benefits and deserve good representation in securing those benefits and the clinic provides that,” he said.

Each year, the clinic hosts a symposium that focuses on a current topic in veterans legal affairs.

This year's event is Friday, and its focus is courage and judgement. Speakers include a retired three-star Air Force General and top lawyers from across the country.

Filbert said the event is as encouraging as it is educational.

“Often you have to stand up for people who no one else will stand up for,” he said. “If you're representing a veteran, hearing those stories [from lawyers at the symposium] gives you ideas in terms of how to do it, but also inspires you to know that while on many days you think 'This just seems like it's never going to work,' ultimately, you can succeed.”

For more information on the MU Law Veterans Clinic or the symposium, visit the school's website.