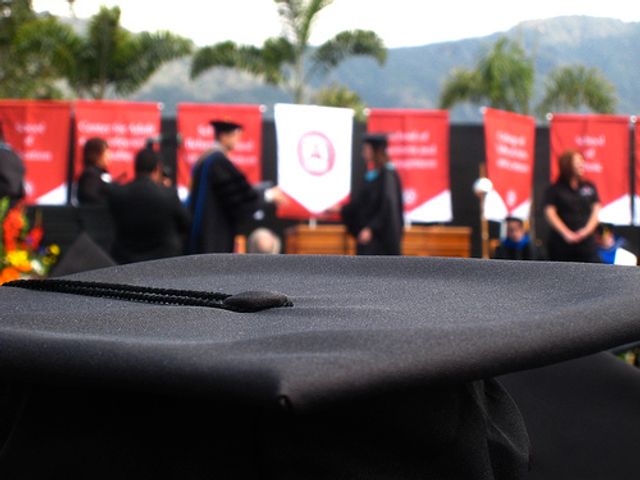 COLUMBIA - It's a statistic that might shock you, or dismay you if you're in college right now. Nearly half of recent college graduates are working in jobs that do not require a college degree, according to a 2013 study released by the Center of College Affordability and Productivity. Analysts call this being "underemployed," meaning people are overqualified for the jobs they are working.

60-year-old George Appleman finds himself in that group. After serving in the Vietnam war and clocking more than 20 years in the Navy, he decided on a new mission - getting a college degree.

"I grew up in a generation where a college education was the golden ticket, if you will, to
success," Appleman said. "I had great aspirations to being the great history teacher."

So, in 1999, Appleman decided to take night classes after work at Columbia College.

He graduated with a degree in history and a minor in political science in 2005, then started his job search.

"I looked around the areas and there just weren't many social studies teachers openings
in the local area," Appleman said.

He looked for months and resorted to help from temp agencies that helped place him at American Air Filters in Columbia where he works the assembly line.

"I don't need the education I have to be able to do the job I'm doing. But I appreciate
that I have a job these days," he said.

Appleman is not the only person in this situation. It comes down to a simple issue of supply and demand. The supply of people, like Appleman, with a college degree is greater than the employers' demands for such qualifications.

Appleman said an HR employee with Columbia Public Schools, who spoke in one of his classes, told them history teachers are a dime in a dozen.

"It deflated the idea of being a history teacher," Appleman said.

In the Center of College Affordability and Productivity's study on "underemployment," it said the number of people working in jobs for which they are overeducated has increased since the 1970s. For example, in 1970, less than one percent of taxi drivers had college degrees, while now more than 15 percent do. The study said that trend will continue.

The projected future growth in both college enrollments and graduates is much larger than the actual or projected growth in jobs that need a college degree, meaning more and more people will find themselves underemployed.

Ben Falby works at Job Point in Columbia as a business consultant and he said he's seen this problem first hand.

"I can name, and won't, folks doing unskilled labor that definitely have full bachelors. Workers that have 20 years of work history and they're needing to support their kids and when push comes to shove, they just gotta find a way to do it," Falby said.

So, is getting a college degree still worth the time and money? A Georgetown University study says, yes. College grads still fare better financially than those who are less educated. Falby said he agrees. He said though, the key to avoiding "underemployment" as a college grad is choosing a marketable major.

"Everybody's having to think about what kind of skill sets they're having to bring to this
labor market to be valuable. Things are changing so fast," he said

Appleman has this advice.

"Choose your major wisely. Look and see what is becoming the hot item to be getting a degree in and don't give up," he said.

He said he hasn't given up yet, "I plan on working until the day I drop," he said.

The Georgetown study also found nursing and elementary education grads have the lowest unemployment rates, while architecture and information systems have the highest.