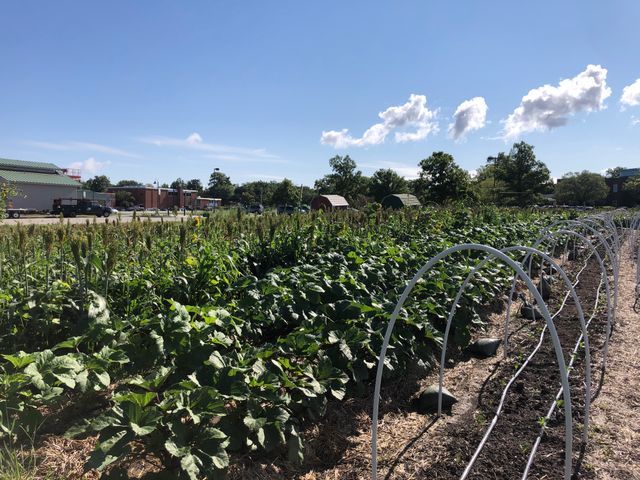 COLUMBIA — For 25 years, Chris Perry has worked as a sign language interpreter for deaf schools in Missouri and Kansas.

Perry lived in Boonville throughout high school and his first job was hauling hay and shucking corn for a local farmer.

Since Perry grew up in a rural area, he said the impetus to farm was always around him.

In 2017, an opportunity fell in his lap to purchase a farm. It was something he’d been trying to do for years, but lacked the resources and financial capital.

“I just had a few livestock and a few things that I was growing, but I always had my eyes on making it a big operation,” Perry said. “Actually doing more with it.”

Last year, he took a break and left his farm behind because most of his income was from outside the farm.

Now, he is focusing on expanding the farm by taking a non-traditional approach.

“I do plan entirely on hiring folks who are deaf and hard of hearing,” the farmer said. “I'd love to make it a learning farm where children who are from disadvantaged and disenfranchised demographics can come out and learn more about circle of life farming and how it plays into our food resources.”

A “teacher by nature”, Perry wants to mentor students who work on the farm.

"So much of the system of generational wealth in the United States is about land ownership," Powell said. "Groups like African Americans, freed slaves and other oppressed minorities have been pretty systematically excluded from land ownership."

With health issues like cancer prevalent in his own family, Perry said he also wants to use farming to change eating habits in the Black community.

“I think there's a general need right now for folks who steward the land and provide alternate resources for those of us that are minorities than what's currently available. I'm looking forward to putting healthier food out in, in the masses so that those of us that don't generally partake in healthy eating can have better resources.”

According to the 2017 Census of Agriculture, there are zero Black farmers in Boone County.

“We've all heard the 40 acres and a mule phrase, that was a real thing back in the day after the Civil War. Many Blacks and many Black former slaves went out and started farming the land. And that was an opportunity for them to actually have wealth and to own property and to move forward with their lives in a sustainable way. But over the years, that has decreased significantly,” Perry said.

Organizations like Green Belt and Columbia’s Agricultural Park Partners are creating policies and resources to make it easier for Black farmers to grow and expand their operations.

The Columbia Center for Urban Agriculture, Columbia Farmers Market and Sustainable Farms & Communities, recently established the Henry Kirklin Black Farmer Fund to "weed out racism" in farming. The fund is named after a Black business owner and farmer who was born into slavery in Boone County. The organizations pulled together $12,000 in donations to remove barriers for growing food.

“We just wanted to do what we could to help with that. And help at this point in history to help try to give opportunities for Black farmers to help them pursue their dreams,” said CCUA Executive Director Bill Polansky.

Leslie Touzeau is a Black woman who actively farmed for eight years in Missouri before moving to Florida and starting as an organic certifier.

“Farming is a really capital intensive career so there's a lot of upfront money," she said. "Not only do you have to buy land, but you have to buy implements and tractors, and infrastructure, and seeds and pesticides, if you're using those. There's a lot of upfront cost. And so, if you can't do that, or if you don't have that already in your family, then it's a lot more difficult to start."

Greenbelt is taking a “proactive approach” by identifying farmers who will benefit from conservation easements.

“It's a big undertaking to talk about trying to untangle a century and a half of systemic racist land policy, but we're trying to find some, you know, we've been looking for opportunities trying to get a handle on how do we become a more inclusive organization because frankly, we're, we're, like most environmental movements, very white,” Powell said.

“If I set out to buy a farm in Southern Boone County, I'm paying a price that's based not just on what I want to do there...I'm also competing with people who want to do residential development. There's large scale business development happening in the vicinity of the Columbia airport and that drives prices up. By putting conservation easement on a piece of farmland, you can basically say this land is only can only be used for agriculture.”

Polansky said CCUA wants diversity and inclusion to go beyond launching or expanding a farm.

“Inclusion for us is, is not it's not even just the farmers, but it’s customers at the farmers market. It's people, it's within the whole food system, where we want people of color to  have more of a role in that. Because farmers markets, we often think of them as places for white people. And, you know, if you look around there's, there's no Black farmers selling at the Columbia farmers market.”