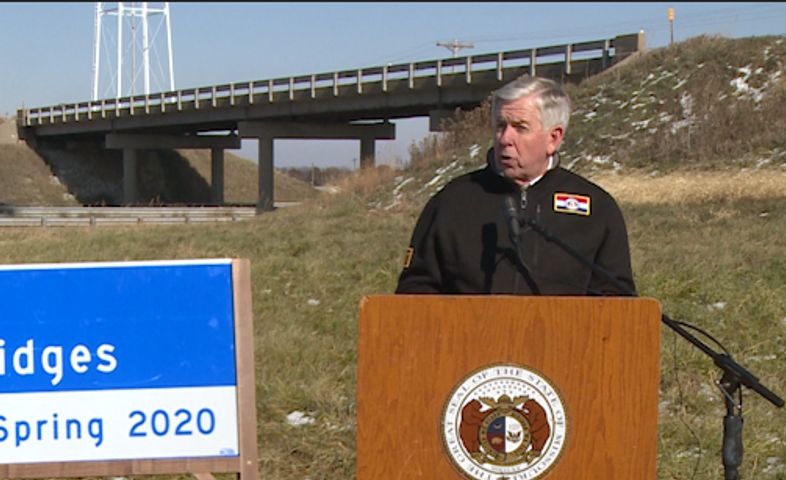 CALLAWAY COUNTY - Governor Parson toured a bridge scheduled to be replaced over I-70 Thursday as MoDOT still faces a major funding roadblock.

The Route D Bridge over I-70 in eastern Callaway County is scheduled to be demolished and replaced in the coming months.

According to MoDOT, the bridge is 56 years old and beyond repair. It will cost more than $1.5 Million to replace.

"It wouldn't have happened if it wasn't for the legislators last year working together," Parson said.

The bridge is included in Governor Parson’s “Focus on Bridges” program passed by the Missouri General Assembly during its 2019 session. The program set aside $50 million in state general revenue to fund 45 high priority bridge projects throughout the state.

Even with the program helping some bridges, MoDOT still faces challenges.

"We have the sixth largest number of bridges in the country," MoDOT Central District Engineer Mike Schupp said. "We have the seventh largest system in the nation, we're funded around the 48th level now."

Right now, MoDOT gets its funds from a gasoline sales tax. The gas tax rate gets approved by voters. It increased incrementally over the years until 1996, when it hit 17 cents per gallon, where it remains today, 23 years later.

"That 17 cents now has the purchasing power of just eight cents," Schupp said.

The last time a gas tax increase appeared on the ballots was in 2018. It ultimately failed, with 53% of voters voting against it.

"Right now with the funding situation we're in, we're basically in a maintenance mode," Schupp said. "We're trying to maintain the system that we've got in the best ways we can. We don't have any money to expand."

Parson said he was surprised voters turned down the gas tax in 2018, but the decision still belongs with the will of the people.

"It's tough to pass statewide tax increases of any kind," Parson said. "I think the reality is, the day is going to come when the people of the state have to make a decision."