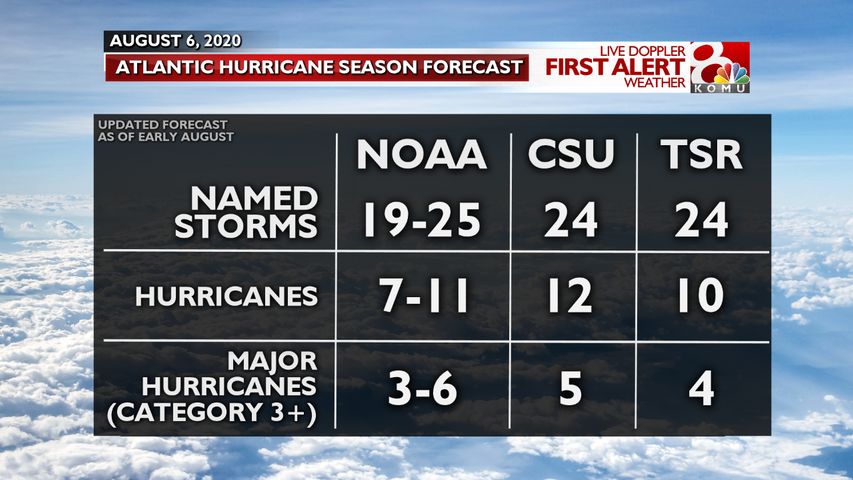 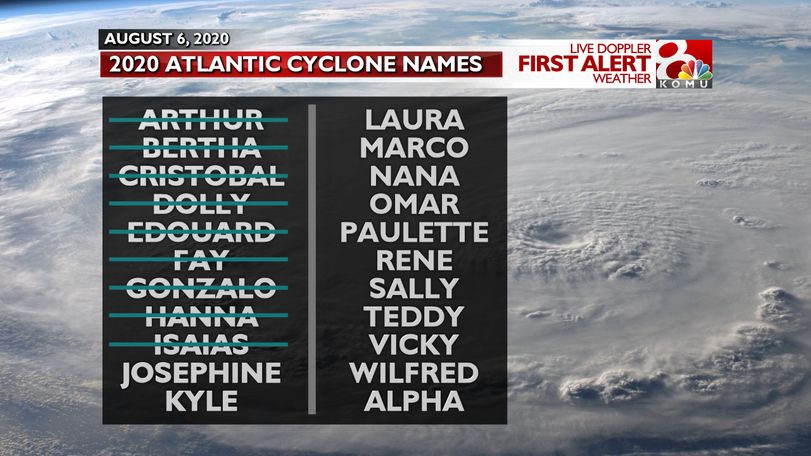 The 2020 names for the Atlantic hurricane season. If they run out, the Greek alphabet will be used, starting with Alpha.

Not only is there a global pandemic in the year 2020, we’ve also been dealing with a very active start to the hurricane season, breaking records well before the peak of the season arrives.

On August 6, the National Oceanic and Atmospheric Administration (NOAA) said an "extremely active hurricane season is possible for the Atlantic Basin" in 2020 and it "has potential to be one of the busiest seasons on record."

The 2020 Atlantic hurricane season has already broken records with nine named storms. It is the earliest that nine cyclones in the Atlantic have been strong enough to be named in a season. In fact, at least six of the nine were the earliest for their respective number-of-storm.

As for number nine, Isaias, it was the earliest “I” storm to be named by a whopping nine days. The previous record earliest was Irene on August 7, 2005.

The average date for the naming of the ninth named storm is October 4, putting Isaias more than two months ahead of schedule. It was named on July 29, 2020.

Two of the nine storms have grown to become hurricanes, and both made landfall in the U.S.

This season, five named storms have already hit the United States, the earliest on record. Those storms were Bertha, Cristobal, Fay, Hanna and now Isaias. The previous record was five named storms hitting the U.S. by August 18, 1916. So, that record was crushed too because Isaias hit on August 3, 2020.

To keep the records going, the tenth named storm, Josephine, must be named before August 22. That is the date in 2005 that Jose was named, and it still holds the record for earliest “J” storm.

It is clear this season has been very active already. It is important to note that the start of the climatological active hurricane season isn’t until August 20 and the peak of hurricane season is around September 10. The season doesn’t end until the end of November.

We have a long way to go and the atmosphere and ocean appear to be primed to make 2020 one of the most active seasons on record.

Forecasters from across the world watch the Atlantic each year and test their skills at predicting what will happen. In early August, some of those forecasts have been updated to show an increase in predicted activity.

NOAA has bumped their numbers up to 19-25 named storms with 7-11 of them becoming hurricanes and 3-6 becoming major, which is when a hurricane becomes a Category 3 or higher on the Saffir-Simpson Scale.

Colorado State University (CSU) is one of the top schools for tropical forecasting and their predication is now 24 named storms with 12 becoming hurricanes and 5 going major.

There are many groups that make predictions and just to point out one more that is regarded is Tropical Storm Risk (TSR) which is from Europe. They’re now saying there will be 24 named storms with 10 of them becoming hurricanes and 4 of them getting to major hurricane status.

All these predictions include the nine named storms which have already formed up to early August. Two of those became hurricanes, both of which hit the United States.

There are a few reasons this season has already been so active and why forecasters believe it will continue to be.

When this energy gets over the ocean it needs a few more ingredients to start the formation process. Those ingredients are appearing abundantly in 2020.

We are also getting out of a neutral El Niño-Southern Oscillation (ENSO) pattern and may be going into a La Nina pattern. La Nina patterns are typically the best for tropical cyclone formation.

Of course, we can’t forget the water. It is warm! And tropical cyclones feed on warm water.

Tropical cyclones have already claimed lives in 2020 and those especially near coasts will need to stay on alert through the remainder of the year.