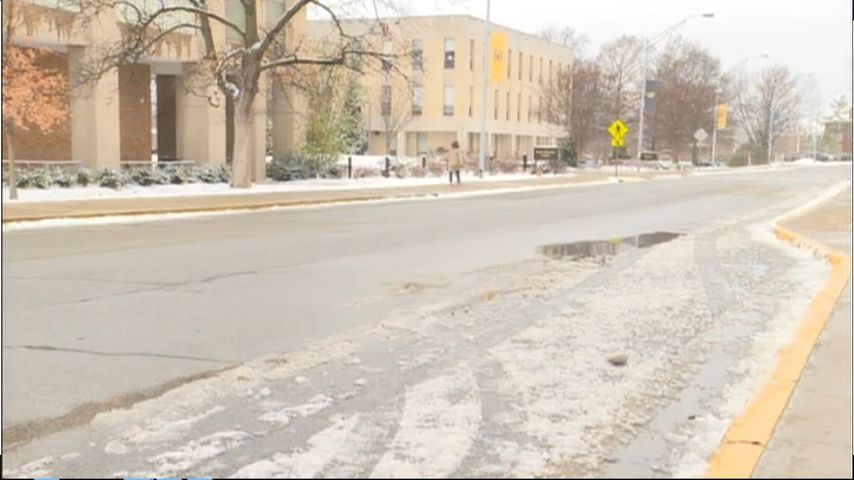 COLUMBIA - The aftermath of last night's winter storm brought cold temperatures and snow, but public works crews worked around the clock to clean things up for drivers.

Columbia Public Works had a 22-person crew working to clear priority routes around the clock. They wrapped up their work around 2 p.m. Sunday.

According to Columbia Public Works spokesman, Barry Dalton, "The crews are working hard. The standard for assessing streets is 'passable by a front wheel drive vehicle at slow speeds' with a higher standard for priority routes as they have higher volumes of traffic."

Drivers told KOMU 8 News they used caution in the morning as crews were still treating the roads, but sidewalks were still icy in different parts of Columbia.

One Columbia driver said he noticed some slick spots when he went out Sunday morning.

"Going over Rock Quarry down through the Bearfield area it wasn't too bad for me. It is slick, and it's getting better as the day goes on as the salt is applied," Wade Coonce said.

Jefferson City Public Works crews also worked throughout the weekend to clean up roads in the capital city.

"We are classifying our roads as mostly clear, " Britt Smith said, the public works operations division director. "With the temperatures dropping overnight, there's still the possibility of having some isolated slick spots. But overall, the roads are in good shape."

Smith said 24 plow trucks worked throughout the day Saturday to clear the way for drivers. The full crew was back at it again Sunday morning from 6 to 9 a.m.

Most roads across the state are listed as mostly clear to clear, according to the MoDOT Traveler map.