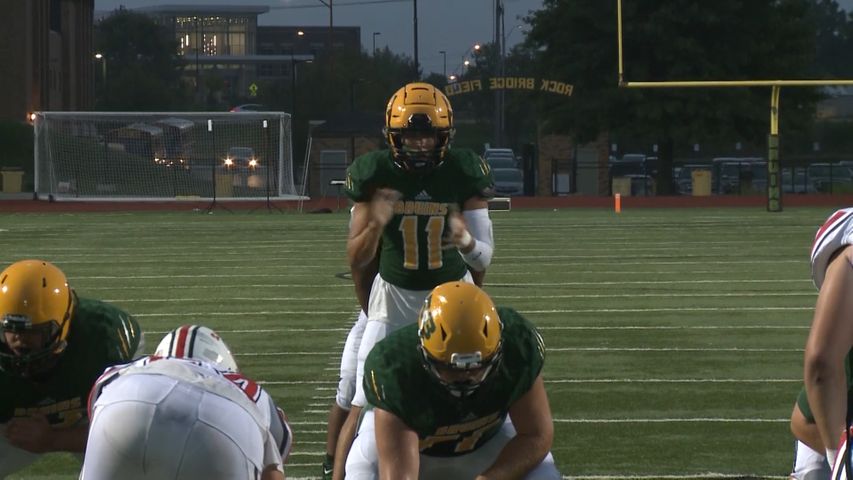 Entering the matchup, the Bruins had won six of the last 10 matchups between the schools, including three consecutively. Dating back to last season, the Jays entered Friday's matchup with a nine-game losing streak.

The Bruins struck first, driving 80 yards down the field for the game's first points. Quarterback Nathan Dent contributed to the drive with 30- and 28-yard runs, while running back Bryce Jackson finished the drive off with a 10-yard rushing touchdown. Jackson chipped in with another touchdown late in the first quarter from two yards out.

Ball security continued to be an issue for the Bruins. Rock Bridge fumbled the ball multiple times, including during the opening kickoff. The Bruins had three turnovers overall, with two fumbles lost and an interception.

The Jays didn't capitalize off the Bruins' turnovers, coughing up the ball four times themselves. A key takeaway came in the third quarter when the Bruins' Jeremiah Nathan recovered a Jeff City fumble in the red zone, preventing the Jays from taking the lead.

Although Rock Bridge was able to get pressure in the backfield defensively, the Bruins could not contain the Jays' speedy do-it-all receiver Devin White.

White contributed to all of Jeff City's points. White got the Jays on the board with a 71-yard rushing touchdown in the first quarter. In the second quarter, White took a 23-yard pass from quarterback Seth Brooks to the end zone. Then early in the fourth quarter, White would score off another handoff, this one from 45 yards out to break a 14-14 tie.

After struggling to gain momentum offensively throughout the game, the Bruins responded. Rock Bridge leaned on the rushing attack of Dent and Jackson to lead the team down the field. Then, Dent found receiver Payton Messer for a 21-yard passing touchdown.

Rock Bridge looked primed to tie the game on the point-after try (PAT), but the Jays called their final timeout prior to the kick. The Bruins would go on to miss the PAT, trailing the Jays by one late in the fourth quarter.

Attempting to close out the game, Jeff City got careless with the ball, allowing the Bruins' Tomissac Johnson to recover another Jays fumble. With four minutes remaining, Rock Bridge had a chance to chew up the clock and score on the final possession.

The Bruins didn't make it easy for themselves. Looking at a 22-yard field goal with 25 seconds remaining, Rock Bridge jumped early, drawing a false start and a five-yard penalty. This proved no problem for kicker Jack Bower, who nailed a 27-yard field goal to secure a 23-21 Rock Bridge lead. Safety Hudson Gibbs would secure the win for the Bruins with a game-ending interception.

The win over Jeff City brings Rock Bridge to three wins on the season, matching the Bruins win total from 2019.

Rock Bridge will return to action at 7 p.m. Friday against Capital City.