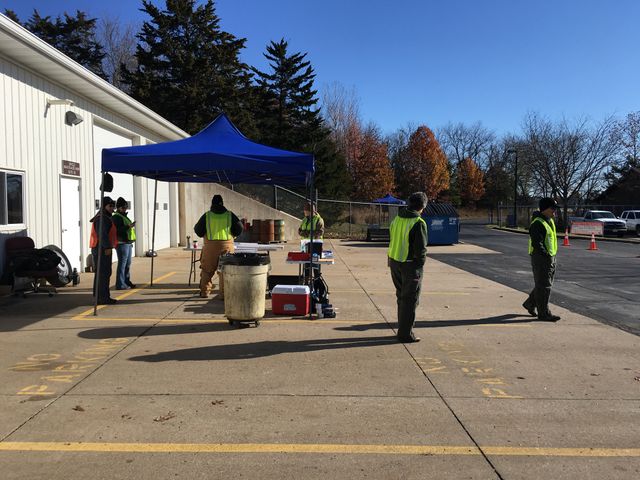 COLUMBIA - The Missouri Department of Conservation is holding mandatory chronic waste disease (CWD) testing in 31 counties until 8 p.m. Sunday. The mid-Missouri counties included in that group are Moniteau, Cole, Macon and Linn counties.

The conservation department will require hunters who harvest deer in those counties to present their deer, or at least its head with 6 inches of the neck attached, at one of 61 CWD sampling stations.

CWD is a deadly illness found in white-tailed deer and other members of the deer family, called cervids. It affects the brain of the animal. The conservation department's media specialist Robert Hemmelgarn said he is concerned CWD could potentially wipe out Missouri’s white-tailed deer population.

“It’s 100 percent fatal in any animal it affects. There is currently no cure and no live animal test, so this sampling effort that we have here (Sunday) is an important way for us to get tissue samples from deer that have already been harvested. It’s an important partnership with hunters to help protect the white-tailed deer population in Missouri,” said Hemmelgarn.

The testing takes around five minutes to complete. Conservation employees take tissue samples from the deer and send them to the lab. Hunters are then notified within weeks about the results. Private Land Services Unit Chief Jason Jesen said it's a simple process.

“We gather information from the hunter on the harvest, we age the deer, and then we sample the glands located right below the deer’s jaw,” said Jesen.

The counties selected for mandatory testing are a part of the CWD management zone.

The management zone consists of 48 counties in or near where the cases of the disease have been found. The placement of grain, salt products, minerals, and other consumable natural and manufactured products used to attract deer are prohibited year-round in the management zone.

Missouri Department of Conservation confirmed 33 new cases of CWD this past deer season, raising the total positive cases among free-ranging deer to 75.

According to the Centers for Disease Control and Prevention, there have been no reported cases of CWD found in humans. But, believe symptoms could include flu-like symptoms. However, it is advised that humans do not eat meat from a deer that is infected.

Missouri Department of Conservation is offering voluntary sampling of deer harvested in all counties in Missouri during the entire deer season to ensure the state's deer population is free of disease.