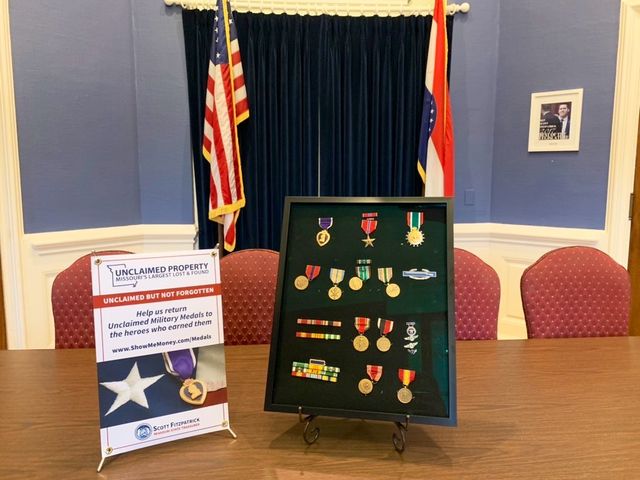 JEFFERSON CITY - Missouri State Treasurer Scott Fitzpatrick is making an effort to match veterans with their missing military medals and insignia's this November.

Fitzpatrick said Veterans Day is a great opportunity to spread awareness of the lost medals and insignias.

"They all earned those, they risked their lives," he said. They have dedicated service to earn them and we want to make sure it gets returned back to them."

"We typically sell those contents if we don't find the person who owns them, but military medals and insignia are a special case," Fitzpatrick said. "We do not sell ever the medals or honors that we hold for people who earned them in the military."

The Unclaimed Property Division is currently holding more than 200 military medals and insignias.

"It's very rewarding to have your service recognized and these medals that have been separated from the veterans, they should be returned to the veteran or their families as part of their family history and the honorable service that was given to our nation," he said.

Kent said initiatives like this one, show that state leaders appreciate veterans.

"It lets members know that they are not forgotten," he said. "It allows those that are currently serving and those who plan to serve in the future to have hope that our nation is not going to forget them when their service is complete."

The Treasurer's office has set up displays and booklets containing pictures of the medals, names of the veterans and the area the medal comes from across Missouri. Displays will be placed at the National WWI Museum and Memorial in Kansas City, Missouri State Museum in Jefferson City, and all seven veteran's homes across the state.

People can search a full list of medals, names and last known addresses of the safe deposit box owners here.

This campaign will continue through November around Veterans Day, however people can claim military medals and insignia all year round.