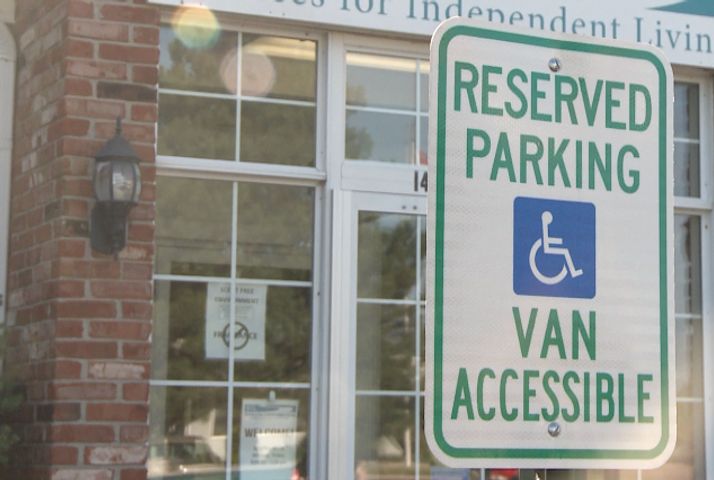 MID-MISSOURI - Finding the perfect parking spot can be a hassle, but it can be even more difficult if you need to use an accessible parking space.

A 2018 report from the Accessible Parking Coalition showed 69 percent of people with disabilities surveyed had difficulties finding accessible parking in their communities.

In mid-Missouri, many people with disabilities face the same struggle, sometimes because drivers are illegally parking in those spaces.

KOMU 8 requested accessible parking violations reaching back to 2017 in more than 10 jurisdictions. The numbers ranged between municipalities, and in some places, the amount of data available was surprisingly thin.

Records requested from each location start in January 2017 and extend to July 2019. The population counts are from the U.S. Census Bureau's 2018 estimates.

Columbia is the largest city contacted for this story, holding about 123,180 people in its limits. The municipal court reported 120 violations during the time requested.

Steven Sapp, the city's director of community relations, said due to "the structure of the records, established by higher courts," it would take considerable time and money to find the locations where each of the violations take place all of the records are held separately.

The MU campus in Columbia had 30,870 students enrolled at the start of the Fall 2018 semester and 29,866 for Fall 2017 according to enrollment data from the university.

The MU Custodian of Records released a list of 375 accessible parking violations from 2017 to 2019. The MU campus had the most amount of violations from all of the places that gave KOMU 8 records.

Per capita, this would mean there are about 7.3 accessible parking violations per 10,000 people in Jefferson City.

Most of the violations were on East High Street. Jefferson City Police Lt. David Williams said that area is part of the historic downtown district.

"It could be as simple as people wanting to shop in that area and not paying attention to the marked handicap special permit areas, or it could just simply be a fact that they are in too big of a hurry or want to get close to the locations," he said.

Sedalia's population is estimated to be about 21,718. The Sedalia Police Department provided records for eight violations. This would equate to 3.7 violations per 10,000 people.

Most of the violations were at the Walmart on West Broadway Boulevard.

Sedalia Police Commander Adam Hendricks said the police department will get calls from businesses, like Walmart, about people illegally parked in their accessible spaces.

"We’re mainly reactive to - like if you look at our stats - a lot of the calls are from Walmart. And it is either Walmart management calling us, or someone with disabilities calling, wanting us to do something about someone parked in a spot that is designated for their disability," he said.

Marshall has about 12,934 residents. The municipal court provided a list of 14 violations. This would be about 10.8 violations per 10,000 people. Most of the violations were in the Walmart parking lot or at Marshall High School.

Fulton is about the same size as Marshall, since it is estimated to have about 12,635 residents. However, Fulton's police department only had record of five violations. This would mean there are about 4 violations per 10,000 people.

Fulton Police Lt. Bill Ladwig said he believes that the number of violations has gone down over the years.

"We respond to every citizen complaint about disabled parking," he said. "Fortunately, over time and throughout the last few years, our tickets have decreased because we’ve tried to educate the public."

Mexico also provided records; it has a population around 11,527. Mexico's municipal court only saw three violations, which would be about 2.6 violations per 10,000 people.

Mexico was the only city that could not provide exact locations for each violation. The city clerk said the violations were all from the "downtown business district."

One of the smaller cities KOMU 8 reached out to was Osage Beach, right on the Lake of the Ozarks.

While Osage Beach only has about 4,570 residents, it had 11 violations on record.

Its number is comparable to Sedalia's and Marshall's, which have almost three to four times the number of residents.

However, the area provides hotels, restaurants, and entertainment for tourists in the summer months, which could raise the number of violations.

However, there is a lot of background that feeds into those numbers, and they cannot be taken just at face-value.

Firstly, regardless of the numbers, people who have disabilities and need to use accessible parking spots say parking is an issue they face regularly.

The Accessible Parking Coalition reported in 2018 that 80 percent of people with disabilities surveyed believed drivers fraudulently parking in accessible spaces was a "widespread" problem.

Payton Smith lives in Mexico and has used a wheelchair for three and a half years.

After a car accident, he lost mobility below his shoulders. He said he deals with issues with accessible parking frequently.

"Before my accident, I never - I never really thought about how much of a pain that would be for someone in a wheelchair," he said.

To travel, Smith has a driver that takes him place to place in an accessible van. The van has a ramp that lets down, which allows Smith to use his wheelchair get in and out of the vehicle.

Smith, as well as other people who use wheelchairs, need eight feet to get in and out of their vans. Accessible parking spots with hash marks next to them are critical for this.

"A lot of times the van parking spots are the only ones you can find with the hash marks to let your ramp or your lift down," he said.

Smith said he often takes extra measures to prevent this from happening.

“A lot of times instead of trying to - or just hoping - nobody parks next to me, I’ll just go ahead and park away from the door,” he said.

Mark Ohrenberg, who lives in Columbia and also uses a wheelchair, said he faces the same issue.

"It happens on a more regular basis. You know, when I’m going to shopping malls like at Target or the Columbia Mall," he said.

Ohrenberg works in the community services division at Services for Independent Living, a non-profit focused on helping people with disabilities gain independence.

He said while working with community members who have disabilities, he has heard concerns about parking accessibility.

"Unless you live it everyday, it's hard to really know the need," he said.

Ohrenberg said this issue impacts everyone in the community.

"You might be thinking, ‘I don’t have a disability at this moment,’ but maybe a year from now, a month from now, you have one, and that’s where you need that," he said.

Both Smith and Ohrenberg said the end goal should not just be officers handing out more tickets; it is educating the public about the issue.

"More than like trying to get people in trouble or get people tickets, or anything like that, we just try to raise awareness to educate people so we can hopefully start to see less and less of those things," Smith said.

From Citizen Complaint to Municipal Court:

All of the police departments contacted by KOMU 8 said they respond to every citizen complaint regarding someone illegally parked in an accessible space.

The City of Columbia even has a place on its website where citizen complaints can be filed online for disabled parking violations.

However, the number of citizen complaints is often much higher than the amount of people actually fined for their actions. For example, in Fulton between 2017 to 2019, the police department responded to 107 complaints; however, only five people were actually fined through the municipal court.

Finding the issue of this problem is hard to trace exactly. After a complaint is called in to the police department, it is often up to the officer's discretion if that person is actually ticketed.

Several police departments that spoke with KOMU 8 said violators are sometimes not ticketed and just asked to move their vehicle in an effort to educate drivers about the importance of leaving those spaces open.

"If somebody’s around the vehicle or in the vehicle, again, we’re going to try to educate them," he said.

"They see that patrol vehicle pull up, and they see those lights come on, they’ll come out and they’ll try to talk to the officer and explain the situation," he said. "Sometimes it’s as simple as the person forgot to hang their placard up."

Sedalia Police Commander Adam Hendricks said officers look at each violation on a case-by-case basis, especially after speaking to the violator.

"It’s kind of like parenting. If you think you’ve made some progress talking with your 'child', then you may not ticket and maybe they saw what your point was," he said.

Just because a driver is ticketed for the violation, however, does not always mean they would have to pay a fine. For example, it is possible for cases brought before the municipal court to be thrown out by the judge without cause.

One of the AAMVA's suggestions in that report was for judges and local court systems.

"When penalties are significantly reduced or charges summarily dismissed, law enforcement will stop allocating the resources to disability parking enforcement." the AAMVA argued. "The outreach message should share why violators need to be held accountable in court."

Some people, businesses and organizations believe education might reduce the amount of people who illegally park in accessible spaces.

The AAMVA's best practices document suggested that education should not just be aimed at the general public, but also Department of Motor Vehicles (DMV) employees, law enforcement, health care providers, and the judiciary.

In an effort to reduce the number of violations, one app called "Parking Mobility" was developed in Texas and is now used worldwide.

The app allows the public to report a citation concerning accessible parking abuse directly through the app. That citation can be sent to local police departments, which then review the citation and decide whether or not to ticket the violator.

He said 143 people in Missouri have downloaded the app. The majority of the violations reported were in St. Louis and Kansas City "with the rest scattered throughout the state."

Payton Smith is one of the people in Missouri using Parking Mobility. He said he uses it to help other people in the disability community know about places with frequent violations.

Smith added, by reporting accessible parking abuse through the app, it notifies people in the community about the problem and raises awareness.

7 officers injured, no arrests made after Saturday night protests in Ferguson