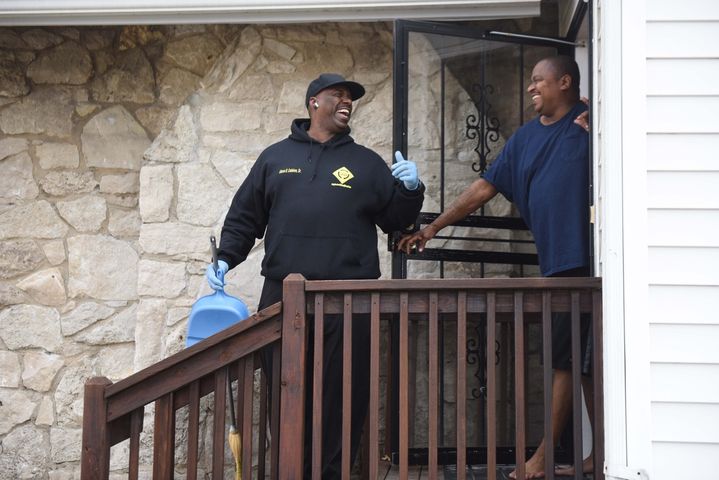 Glenn Cobbins, left, laughs with Chris Leach, a local resident, after Cobbins borrowed a broom from Leach while cleaning up a nearby park on Sunday, Dec. 8, 2019. Cobbins has continued to do community service deeds for his neighborhood after being fired recently from his neighborhood outreach specialist job with the city. / Alexandria Wells 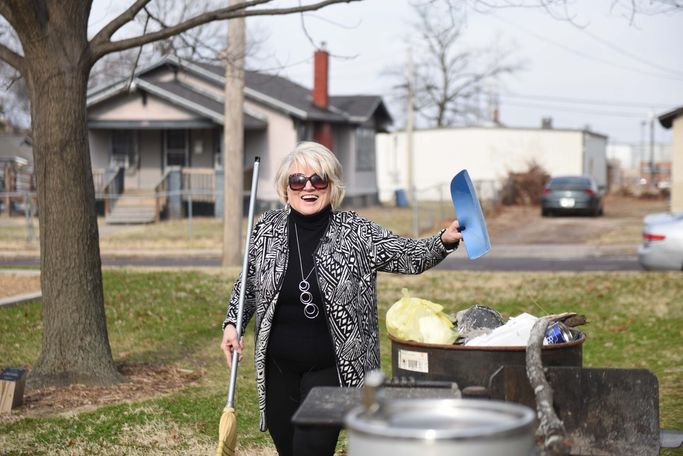 Judy Hubbard sweeps Downtown Optimist Park on Sunday, Dec 8, 2019. After attending church that morning, Hubbard joined Glenn Cobbins, who was her work partner prior to getting fired, to clean trash up in a local neighborhood. / Alexandria Wells 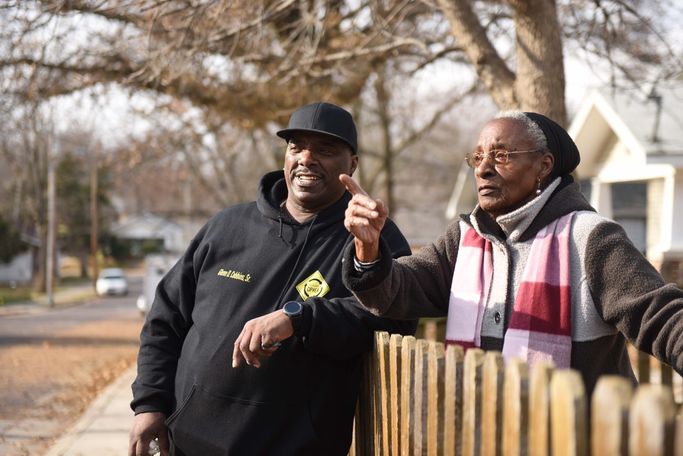 Glenn Cobbins leans in to talk with Ladenia Cowper, who lives in the neighborhood Cobbin's group chose to clean up on Sunday, Dec 8, 2019. Cowper has lived there for 15 years; she provided the cleanup crew with trash bags and laughs, and in turn, they removed some old leaves from in front of her house. / Alexandria Wells

COLUMBIA - When Glenn Cobbins, Sr. and Judy Hubbard sat down for a meeting with their supervisor at city hall on a Wednesday in October, they were under the impression it was a monthly check-in.

Three minutes into the conversation, however, they no longer had their jobs.

“I kind of laughed it off,” Cobbins said. “I asked, ‘Are you serious? How dumb can you be?’ Golly, that was a rude awakening.”

The duo was approaching their fourth year in their positions as “neighborhood outreach specialists.” The part-time job was built into former City Manager Mike Matthes’ 2016-2019 strategic plan.

The plan identified three low-income, and historically underserved, neighborhoods in north, east and central Columbia. As their job description states, Cobbins and Hubbard were hired to “participate in a collaborative process for addressing issues of social equity.”

Cobbins put it simply: He saw his position as a way “to bridge the gap between citizens and the city government.” Hubbard said it was a continuation of the work they were already practicing.

“It was a wonderful title for a job,” she said. “It’s exactly what we do: reach out into the community and be with the people on the streets. We get to know them and their lives.”

Both Cobbins and Hubbard felt the necessity of their roles increase after the month of September, when six people were fatally shot in the span of 12 days, many in the neighborhoods they served.

“I said at the time that I feel like there’s a hurricane of violence swirling over our city,” he said. “And that was really driven by a heat map of all the shooting incidents in Columbia.”

Treece said there are others doing the same work as Cobbins and Hubbard. And they’re doing it for free.

“The good news is there are scores of community leaders that have stepped up on a volunteer basis to work with those victims and the victims’ families,” he said.

The map of crime that Treece referred to includes not only Cobbins’ office, but also his backyard.

“We were going into areas where the majority of people were black people,” Cobbins said. “We were trying to level the playing field so everyone can have a living wage and a dying wage. I say a ‘dying wage’ because people in my neighborhood can’t even afford a funeral.”

While the pair was employed by the city, they each made $11 an hour and reported to Assistant City Manager Carol Rhodes. According to Cobbins, she was the only one in the room for their termination. When asked for a comment, Rhodes declined on the basis of “personnel matters.”

Second Ward City Councilman Mike Trapp was not part of the decision to let them go. However, he said it might have aligned with new city leadership.

“I think we’re in better shape to address issues now than we were before we created those positions,” he said.

Because of the restrictions that come with being part-time, Cobbins and Hubbard were never compensated beyond 20 hours per week. Regardless, they were available to families any time of day.

Former Columbia Police Department Deputy Chief Tom Dresner worked with Cobbins and Hubbard before they had their city titles.

“They were there on the ground every day,” he said. “It’s never about the money for them. They were doing it long before they were paid to do it.”

Dresner said his relationship with Cobbins started almost 30 years ago.

“I was a young officer in the Columbia Police Department, and he was on the other side of the law,” he said. “He was a drug dealer. Him and his family were frequently involved with us.”

Cobbins’ success story is the type of narrative the city tries to create for all its troubled youth. He grew up in Columbia “fatherless” and fell into drug dealing. At age 17, he was shot in the foot by a CPD officer while running away from a crime. After he got out of prison for the second time in 1998, he did a drug-treatment program at the Ozark Correctional Center in Fordland. He returned to Columbia ready to redeem himself; the timing lining up perfectly with his introduction to Hubbard.

When it comes to life experiences, Hubbard’s is a stark contrast. She’s a mother of four, whose passion for her community started when she was working in human resources at Physician’s Home Health. After hearing about the typical life paths of kids who grew up on Elleta Boulevard, which used to be a high-crime area, she decided prayer wasn’t enough. She started showing up in the evenings, planning activities for them and seeking out mentors. Cobbins soon became one of them.

The pair opened the Imani Mission Center in 2000, which provided after-school programs and life-skill sessions to low-income families in Columbia. The center ran out of funding in 2015 and was forced to close its doors. That’s when Matthes recognized the value they could contribute at a city level.

Matthes said “Glenn Cobbins and Judy Hubbard have done more for our community than anyone I have ever worked with.

“I hired them to try to reconnect the city government with the community,” Mathes said, “and they did a phenomenal job.”

When Cobbins and Hubbard went out to do community surveys in the strategic neighborhoods, one of the first questions they would ask people was: “Do you feel equal to others?” It was through this type of conversation that Hubbard developed a close relationship with the Marine family.

“I am grateful because they understand and listen to us,” said Shemeca Marine-Hardwell, who recounted a story of when Hubbard helped her keep Section 8 housing. “They’re always there, and they have the right words."

Marine-Hardwell lost her sister, Danielle Beverly-Mae Marine, on Sept. 22. She was one of five homicide victims. The family does not have an answer as to why their daughter was shot.

Vanita Marine, mother of the victim, said Hubbard has been there through her grieving process.

“She’s helping me get through this crisis,” she said.

Shemeca and Vanita were among the first people to hear about Hubbard’s termination.

“I was in a state of shock,” Marine-Hardwell said. “I had to question why. It’s not right.”

She said she thinks the city should be hiring more people like Cobbins and Hubbard. KOMU and the Missourian reached out to both City Manager John Glascock and Police Chief Geoff Jones about any neighborhood outreach plans moving forward. Neither responded.

The city is in the process of developing the next strategic plan. Treece said neighborhood outreach will likely be a component, but it might look different.

“I still think we’ll have some type of community liaison position,” he said. “But I also want to empower police officers to have that responsibility and front-line duty.”

According to Trapp, there are several months between now and when the city will be ready —financially and structurally — to hire someone.

“Probably January 2021, our new neighborhood outreach program, whatever that looks like, will be in effect,” he said.

Cobbins said his termination has served as motivation to work harder. He and a group go into low-income neighborhoods every Sunday, beautifying the streets and asking people what they need.

He said until city officials do the same, social equity cannot be achieved.

“They need to take their titles and their ties and bury them somewhere,” he said. “They need to come out with Judy Hubbard and Glenn Cobbins.”