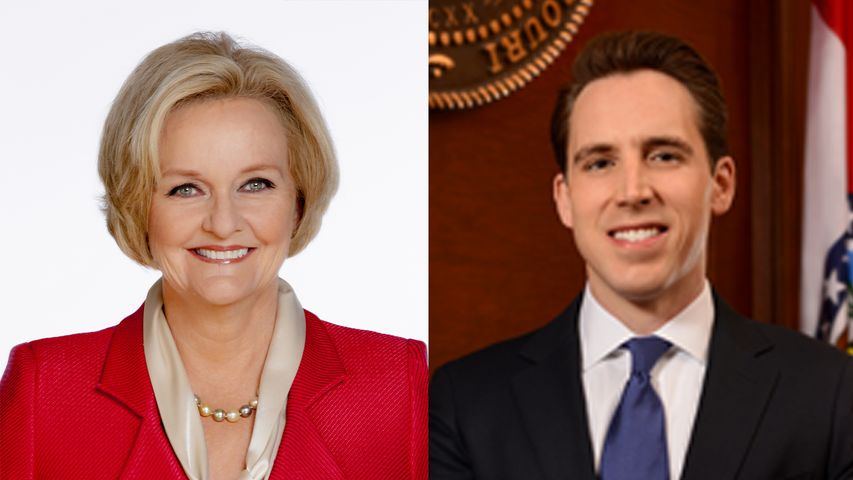 Hawley's campaign manager, Kyle Plotkin, recognizes the challenges Hawley will be facing against McCaskill, whose been in politics for decades.

"And just being a politician for thirty-six years, you build up a lot of favors and you get a lot of money," Plotkin said. "So, Josh is introducing himself to Missourians, and his vision for what he wants to do in the Senate. It’s being welcomed with a lot of support both form the grass-root but also in terms of donations."

In early April, McCaskill's campaign sent out a press release detailing the highlight of her first quarter campaign report.

“Hard-working Missourians have made clear that they value Claire’s ability to break through the partisan gridlock in Washington and get things done for them,” said McCaskill for Missouri spokesperson Meira Bernstein. “The incredible grassroots momentum behind Claire’s campaign is proof that Missourians know Claire is a Senator who will always put them first.”

Candidates running for office are required to release their campaign fundraising data, which is separated into quarters. The first quarter ended on April 15.

Data from the Federal Election Commission (FEC) only shows donations of $200 or more. After going through the reports, KOMU 8 found the following campaign fundraising patters:

Josh Hawley's campaign manager, Kyle Plotkin, said most of Hawley's contributions come from within the state.

"Most of it comes from unique individuals donors. More than half of our donors are from the state of Missouri. Which is in contrast to Senator McCaskill’s donations," Plotkin said.

MU Political Science Professor Peverill Squire said receiving donations from out of state is normal, and at the end of the election, it doesn't really matter where the money came from.

“Well, out of state contributions are always part of a campaign," Squire said. "It probably doesn't matter a great deal. It comes up in every campaign. Something that the candidate who raises less money from outside the state will make an issue out of it. But, both candidates are going to get a lot of money from a lot of people, a lot of organizations, and a lot of that money will come from out of state."

Based on the same data from the FEC, showing only donations of $200 or more, most of Hawley's contributions come from Missouri, with Florida and California donors also sending money his way. For McCaskill, the state most often mentioned on the FEC website is Massachusetts, because most donations were filtered by a Democratic fundraising non-profit based out of that state. The FEC website shows from were each of the donations filtered by ACTBLUE come from.

But when you compare overall donations, including those who donated less than $200, most of the contributors for both candidates come from Missouri.

The Club for Growth PAC is Hawley's top contributor, while most of McCaskill's donations have come through ACTBLUE. 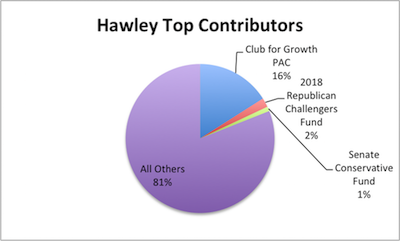 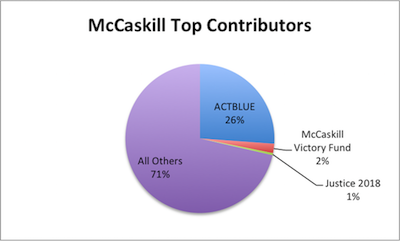 Squire said, in general, "things are lining up favorably for the Democrats."

"But we still have a long time between now and election day in November. So, lots can change," he said.

The next quarter will end July 15.