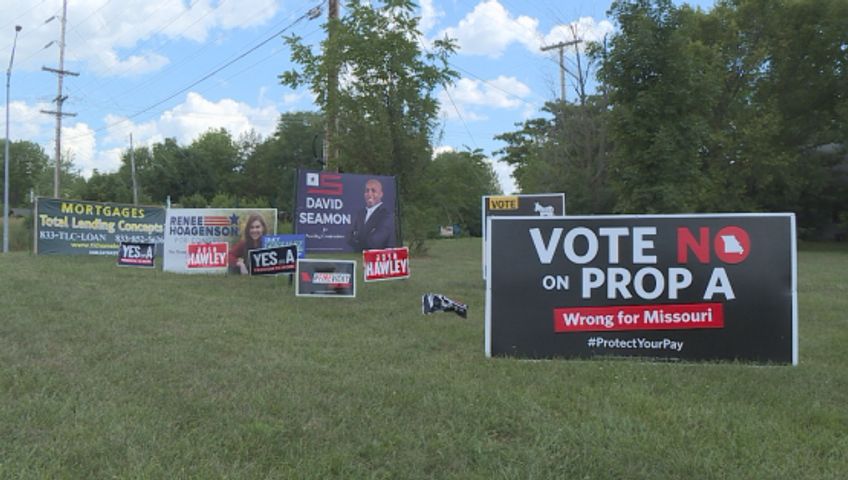 COLUMBIA - Proposition A is a hotly contested initiative that is seeing controversial claims on both sides.  On August 7, Missouri voters will decide if Missouri will become a "right to work" state.

Supporters say right to work will draw business to the state and give workers the choice not to pay into a union. Opponents say it's an attempt to weaken unions and could lead to lower wages.

Twenty-seven states in the country are right to work states.

Rabindra Bhandari, a professor of economics at Westminster College, said, right now, ads for and against Prop A are heavily partisan.

"The ads released for right to work are more politically-based. They're not necessarily about how this would benefit the states," he said.

Bhandari said there are two main arguments when it comes to Prop A. First is the issue of individual freedoms, people being able to choose if they want to join labor unions or not. Second is the matter of economics and making the state more competitive.

“People who oppose Prop A, oppose it because it allows a certain group of people to free-ride on the dues are paid by somebody else.”

Bhandari called this “the tragedy of the commons,” a situation where some individuals gain short-term benefits at the expense of the majority.

He also said, while unions will still exist in right to work states, they will not have the same negotiating power.

This video, by National Right to Work, supports Proposition A.

In response to this, We Are Missouri spokesman Jack Cardetti says union dues, by law, are not allowed to go to political campaigns or candidates.

"All political contributions [from unions] are voluntary funds.They're kept in a completely separate fund and can only be done voluntarily," he said.

The Federal Election Commission states campaigns may not accept contributions from labor organizations, the treasury funds of corporations or national banks. However, labor unions are allowed to pay administrative or operating costs of Political Action Committees or PACs.

Result: We find this claim false.

National Right to Work was not available for an interview but responded in a statement, saying that number is now updated to $1.3 billion. The cited number comes from a website backed by union opponents.

Result: We find this claim incomplete.

The Center for Responsive Politics, a non-profit, nonpartisan research group that tracks the effects of money and lobbying on elections and public policy, says none of the top donors of Pelosi or Clinton's campaigns are labor unions.

In fact, PAC contributions to Clinton's 2016 presidential campaign accounted for only 0.31 percent of all donated funds.

In Pelosi's case, 27.39 percent of donated funds came from PACs.

Buying power is the money an investor has available to buy securities and equals the total cash held in the brokerage account plus all available margin. National Right to Work cited the National Institute for Labor Relations Research (NILRR), which is a research institute funded by National Right to Work, according to the progressive Center for Media and Democracy, a nonprofit watchdog group.

NILRR said it finds that real purchasing power is higher in right to work states. National Right to Work claims its calculations used statistics from the Bureau of Labor Statistics. According to the NILRR fact sheet, right to work states have also seen higher economic growth.

Result: We find this claim incomplete.

KOMU 8 News found this claim incomplete because of NILRR's affiliation with National Right to Work.

This video, by We Are Missouri, opposes Proposition A

Cardetti said We are Missouri used data from the 2016 US Census Bureau.

"If you add up the 27 right to work states and the other states that don't have right to work, including Missouri, and you look at median household income, it's really important to look at what the middle class is making," he said.

Result: We find this claim false

"All CEOs in Fortune 500 companies and publicly trade companies have to produce that type of information on their annual SEC filings. So that number comes straight out of their SEC filings," Cardetti said.

Result: We find this claim unconfirmed.

After lengthy research, KOMU 8 News could not see any evidence confirming nor denying the number associated with the claim.

Further arguments from both sides

In a statement, Patrick Semmens, spokesman for the National Right to Work Committee, said the following about the anti-Right to Work ads:

“It’s unfortunate that union bosses won’t level with the people of Missouri about Right to Work’s real impact. It’s shameful that union bosses are spending so much money, much of it from forced dues, just to protect their power to have a worker fired simply for refusing to hand over part of their pay check to union officials.“

In response to the Vote Yes on Prop A ads, Cardetti said "What Prop A really is, is it’s a race to the bottom. We think it's very disingenuous that this Virginia-based special interest committee to make those type of claims. What they ought to be looking at is what the middle-class makes in right to work states compared to Missouri. That's the true apples to apples comparison."